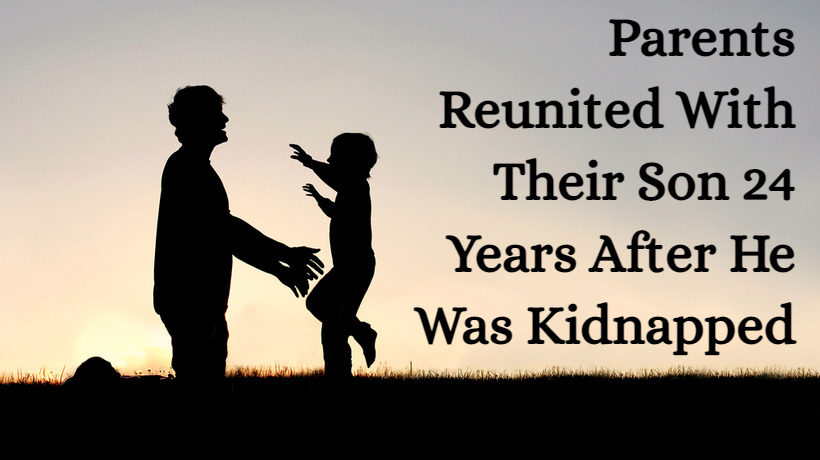 A Chinese couple has finally reunited with their son, Guo Xinzhen, who was kidnapped 24 years ago when he was toddler.

On Sunday, Guo Gangtang and his wife Zhang Wenge held their 26-year-old son with tears in their eyes during a reunion planned by police in their hometown of Liaocheng, located in the eastern province of Shandong, according to NPR.

Guo Gangtang, now 51, has been searching for his son relentlessly after he was abducted from his front porch when he was just two years old in 1997 by a woman and her boyfriend. From there, the couple took Guo Xinzhen northwest to the Hebei province, which borders Beijing, China’s capital. The couple then sold the toddler to a couple in central China. Despite authorities giving up on the search, Guo Gangtang never stopped searching for his son.

For years since his son was taken, Guo Gangtang rode his motorcycle around China, carrying a banner with his lost son’s image on it and a backpack full of fliers. According to ABC News, Guo wrote on his social media account that he wore out 10 motorcycles riding through 30 of China’s 34 provinces and regions.

Police located his son by searching through databases in central Henan province in June. A family reunion with Guo Xinzhen, who is now a teacher, was planned for Sunday after a DNA test confirmed the link, according to the official Xinhua news agency.

The demand to find Guo Gangtang’s son increased after the Ministry of Public Security launched their campaign this past January to solve cold cases involving abducted children. Since the campaign launched, approximately 2,609 missing or kidnapped children, including adults who went missing or were taken as children, have been found.

The couple responsible for abducting Guo Xinzhen has only been identified  by their first names, Tang and Hu. Shortly after the police caught the two, they confessed to trafficking the 26 year-old alongside two other boys.

Guo Gangtang launched the website “Tianya Xunqin” in 2012, which translates as “Find your family on the edge of the world.” He told local news that his site has helped other families in locating abducted or missing family members.

Guo shared on his Tiktok social media page on Tuesday, “I’ve found my son, and I want to get back to normal life as soon as possible.”