Signs They’re a Narcopath (What?) & How to Deal 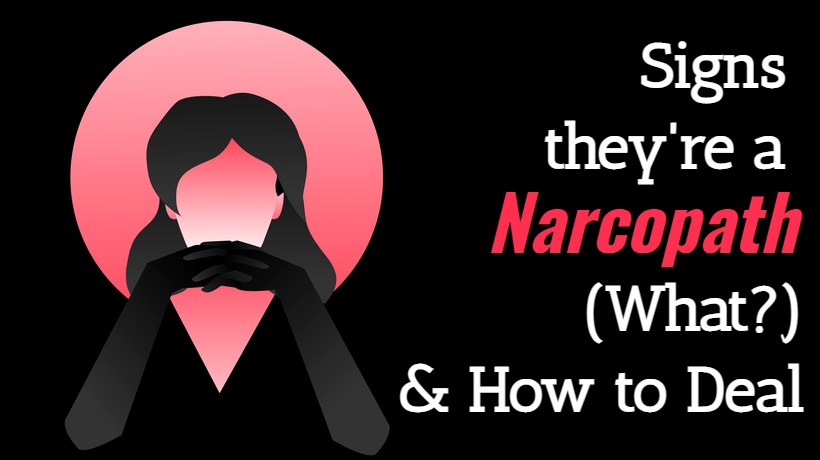 You might have already heard of narcissism at some point or another. And you probably know what a sociopath is. But what happens when these two disorders mix? A narcissistic sociopath—otherwise known as a narcopath—has both violent and sadistic, manipulative tendencies.

According to the National Library of Medicine, Otto Kernberg was the first to officially document narcopathy in 1984.  He described this mental health condition using the following characteristics:

In the Diagnostic and Statistical Manual of Mental Disorders, Fifth Edition, the American Psychiatric Association clearly defines both Antisocial Personality Disorder (the clinical term for what is commonly known as psychopathy or sociopathy) and narcissistic personality disorder, highlighting their similarities and differences: According to the APA, Antisocial Personality Disorder is a “pervasive pattern of disregard for and violation of the rights of others, occurring since age 15 years.” In comparison, Narcissistic Personality Disorder is defined as a “pervasive pattern of grandiosity (in fantasy or behavior), need for admiration, and lack of empathy, beginning in early adulthood and present in a variety of contexts”.

While there may be some overlap between these two distinct personality disorders, a combination of them both can have disastrous results. Because people with Antisocial Personality Disorder often have little to no regard for others or the effect they may have on others, they can be manipulative in order to get what they want. Similarly, a narcissist also lacks empathy for others; however, a narcissist also believes they benefit everyone around them as much as themselves.

A narcopath may experience most, if not all, of these symptoms:

A combination of narcissism and sociopathy can often explain violent or abusive behavior, as these individuals are usually psychologically unaware of the gravity of the harm they inflict on others. Such little regard for others’ well-being can lead to a pattern of dehumanization of relationships and feelings, which can often result in hostile behavior.

Spotting a narcopath is perhaps the most difficult part. These individuals can be very calculating and manipulative, and can often appear charming and witty. Additionally, they are often extremely intelligent and can read others very well, specifically to exploit others’ weaknesses.

Nevertheless, although these characteristics may not always be visible to others, keeping an eye out for these signs can help determine if you are dealing with a narcopath, and find ways to protect yourself.

While there is no definitive way of knowing if a person is a narcopath just from looking at them, these signs can be distinctive red flags to help you steer clear of potentially people. Setting clear boundaries against them will certainly protect you against their intent to manipulate you. Unfortunately, you can’t have a regular connection or even a relationship with this individual because they will manipulate and take advantage of you.