Tom Selleck Tips $2020 at Upper East Side Restaurant For #2020TipChallenge 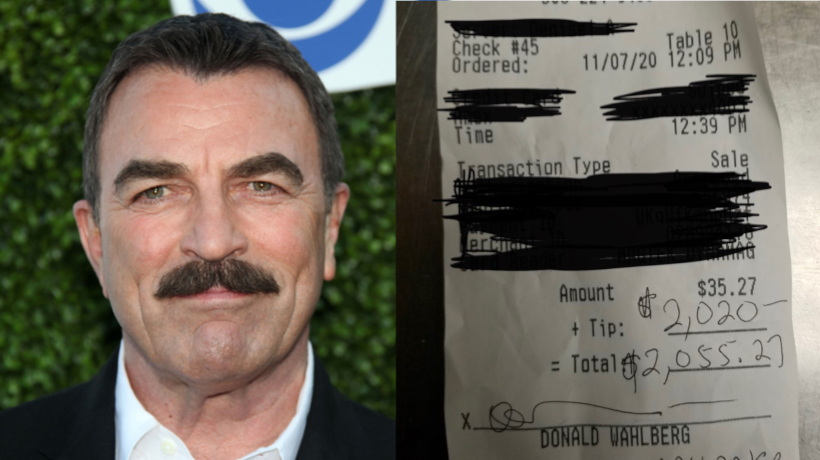 Tom Selleck, famed actor who is best known for his role in Magnum P.I., Friends, and Blue Bloods, has taken on the 2020 Tip Challenge, popularized by Donnie Wahlberg.

Selleck posted a picture of his $204 receipt at Elios, an Upper East Side restaurant in New York City. On the receipt, he wrote a short message for the staff, “For Elios, I am honoring my friend Donnie Wahlberg’s tip challenge with my sincere hope for a better 2020. Thank you all.”

He wrote, “I found out that my TV Dad [Tom Selleck] has generously accepted the #2020TipChallenge at Elios Upper East Side! Love ya dad,” Wahlberg wrote. “I didn’t start it but I’m proud to be part of it. To those who gave even the smallest extra amount this year — THANK YOU. #spreadloveandlovewillspread”

Wahlberg told People magazine that Selleck never mentioned he had participated in the 2020 Tip Challenge noting that the two have “done three Blue Bloods dinner scenes since he did it.”

The challenge originated in Alpena, Michigan, according to The Alpena News. The challenge started when a waitress named Danielle Franzoni received a $2,020 tip from a stranger at the end of 2019 along with a Happy New Year” and “2020 Tip Challenge” note.