Do You Trust Easily Based on Your Zodiac Sign? 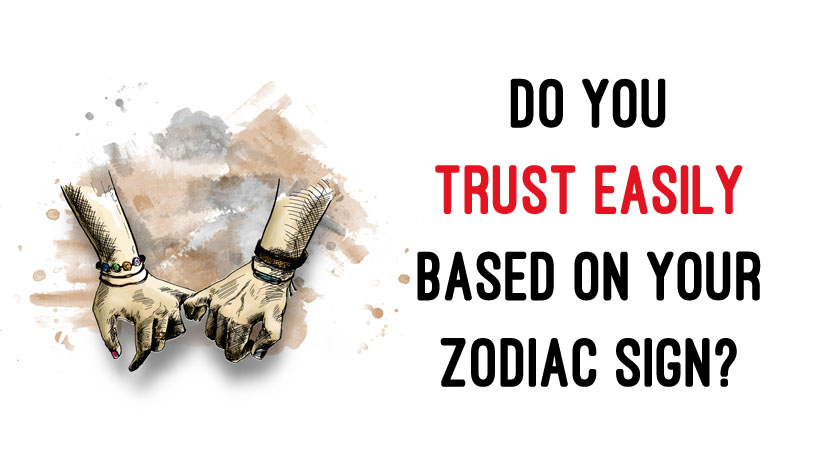 Depending on the type of person you are, you might be wary of trusting others out of fear of getting hurt or you might be on the polar opposite end of the spectrum. Read below to find out how trusting you are according to your zodiac sign.

Aquarius (January 20th-February 18th)
As an Aquarius, you’re wary of trusting just anyone. You can be on the quieter side, and since you are so independent, you feel the need to keep to yourself so that no one hurts you.

Pisces (February 19th-March 20th)
Due to your kind and compassionate nature, you give people innumerable chances, even when they continue to wrong you. It’s great to see the good in people, however, it would serve you well to filter who you should let back into your life.

Aries (March 21st-April 19th)
Since you love taking on leadership roles, you are inclined to place your trust in people. You have to believe that they will cooperate with you fully – and that they won’t take advantage of you.

Taurus (April 20th-May 20th)
It takes awhile for a Taurus woman to let people in, you want to get to know the other person well enough first. Once a person betrays your trust, you’re quick to remove them from your life- simply because you don’t think people can change once they’ve shown their true colors.

Gemini (May 21st-June 20th)
It’s easy to assume that since Geminis are such social beings, they are able to easily trust anyone they meet- but it’s actually the exact opposite. These interactions are all surface-level. Geminis take a long time in deciding whether or not to truly let people in.

Cancer (June 21st-July 22nd)
Since you have such strong emotions, you tend to be pretty open to other people. Even if you don’t know how to express exactly how you feel to another person, you are trusting enough to try and explain it to them in the hopes that they can help you understand.

Leo (July 23rd-August 22nd)
Although Leos are trustworthy people, they can be picky about who they place their trust in. This is because you have a protective nature that starts with yourself and extends to the people you care about. If you sense that someone is dishonest, you won’t blindly put your faith in them and hope for the best –  you’ll steer clear at all costs.

Virgo (August 23rd-September 22nd)
If a Virgo trusts someone, you know that they’re deserving of it. You know who to trust and who not to trust because you look at the world with a healthy dose of realism, and you carefully think every decision through before acting on them.

Libra (September 23rd-October 22nd)
You are a bit indecisive when it comes to trusting other people –  especially if you’ve been hurt before. Try and listen to what your gut tells you; it’s usually right.

Scorpio (October 23rd-November 21st)
Scorpios have major trust issues. You sometimes find it difficult to open your heart to other people because you fear they’ll betray you. Because of this, you shield your feelings and you keep them bottled up inside.

Sagittarius (November 22nd-December 21st)
As a Sagittarius, you always speak your truth. If you’re suspicious about someone’s motives, you’ll tell them exactly what you’re thinking. However, you’re generous with the amount of trust you give out to people, but you won’t keep them around once they betray you.

Capricorn (December 22nd-January 19th)
You pride yourself on being disciplined and responsible, and these traits directly impact your decision to trust others. You don’t just blindly trust people; you believe that they have to earn it first.