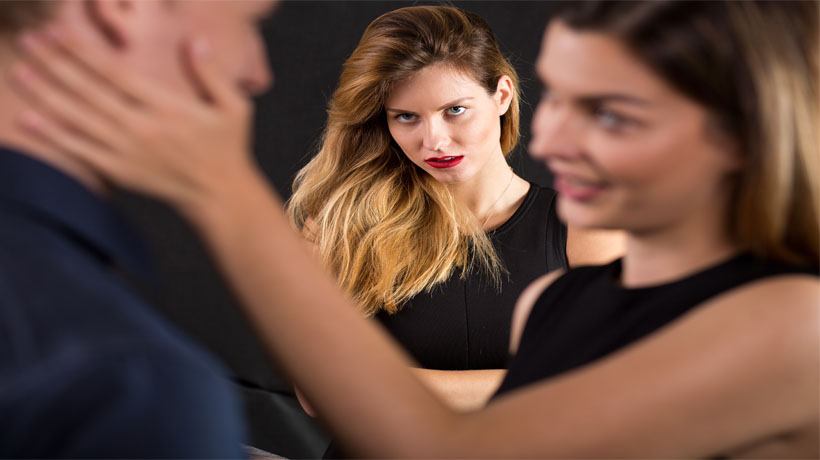 Your partner doesn’t have to kiss another woman to be a cheater. Having feelings for someone else can be even worse than physical infidelity. Watch out for these eight signs that may show he’s into someone else but won’t admit it.

He suddenly has plans all the time
If his schedule wasn’t crazy busy before, this is definitely a red flag. All of his free time has to be going somewhere, and his neglectful ways should be enough to prove his wandering heart. Saturday and Sunday are most likely the only days he’s not working, so if he can’t carve out time to see you then he simply doesn’t want to.

He’s not mentally present
Being with you physically is only half the battle. If your partner is with you but you get the sense that he wishes he were somewhere else, it might be because he wishes he were with someone else. You never want to feel like you’re forcing him to spend time with you. It might be time to trust your gut and confront the situation.

You no longer do your favorite activities together
Whether you have a weekly Sunday brunch tradition or always watch your go-to shows, if these plans have mysteriously dropped out of existence, then he’s found other ways to spend his time that don’t include you. Watch out, because this could be his way of easing out of your relationship.

He’s constantly bringing up someone else
Finding ways of slipping another woman’s name into every conversation is a telltale sign that your partner shares more than just inside jokes with her. Remember that, after all, he’s talking about her the way he used to talk about you and there’s absolutely no reason to stick around and see how this will end.

He’s claims they’re “just friends”
If your partner has recently found a new female friend that he now spends all of his time with, be alert. Even if they really are just friends, there’s always a possibility that he’s either emotionally cheating or things will eventually get physical behind your back. You’ll know your instincts were right if you break up and he immediately starts dating her.

He’s always picking fights
The fact that your partner seems to enjoy arguing with you shows that he’s looking for a way out. He’s probably hoping that if he hurts you enough, you’ll break up with him, and then he won’t have to feel guilty for falling into the arms of another woman.

He no longer shares his feelings.
This one is simple, Ladies. If he’s not telling you anything personal anymore it’s probably because he’s telling someone else. Don’t force it, because this will only push him into the other woman’s arms. If he doesn’t want to confide in you, then you shouldn’t want to be with him.