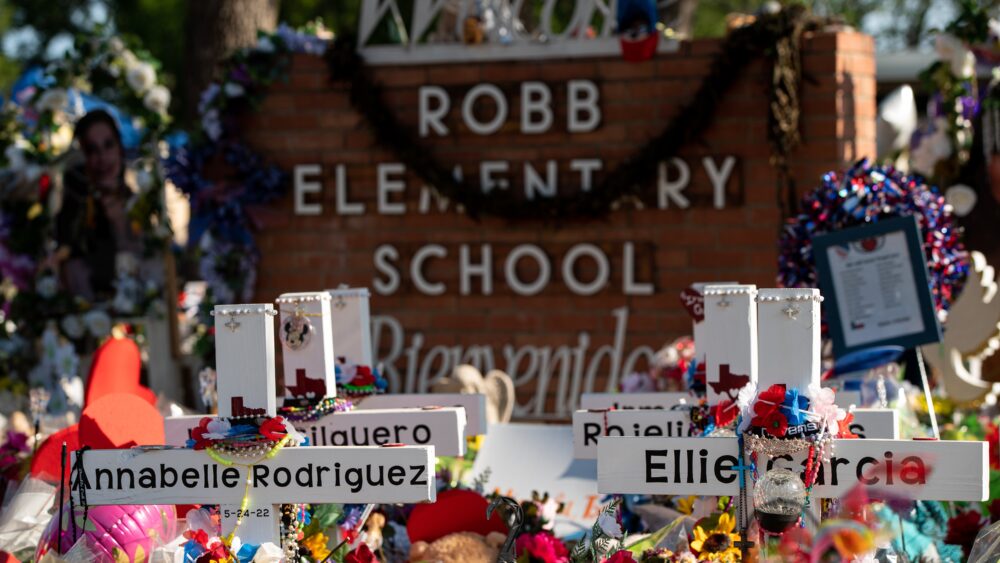 In haunting surveillance footage newly released from the May 24th massacre at Robb Elementary School in Uvalde, Texas, a little boy is seen peering around the corner at the gunman who had just entered the building. While the child’s eyes are still focused on the perpetrator as he walks toward a classroom, ear-splitting gunfire begins to erupt.

The child freezes for a moment before retreating back around the corner. At that point, the hallway is empty, but the semi-automatic rifle can be heard blasting bullet after bullet inside the classroom out of view.

Soon, officers begin to trickle into the building. But it would take 77 minutes for them to confront the shooter. Before that point, they can be seen peering timidly around the corner, talking amongst each other —  even looking down at phones from time to time and stopping to apply hand sanitizer.

The footage, which runs for nearly an hour and a half and was obtained and published by the Austin American-Statesman and KVUE on Tuesday, has been criticized by both the families of victims and local officials, PEOPLE reports. Among the points of outrage, per CNN, is the fact that the public was able to view the horrifying footage before it was shared privately with those closest to the tragedy.

CNN said that the footage that has been released was ‘slightly edited to blur the image of at least one child and remove the sound of children screaming.’ KVUE wrote that they had “blurred parts of the video out of sensitivity for the victims and their families.”

“There’s no reason for the families to see that,” Uvalde Mayor Don McLaughlin said of the footage, per CNN. “I mean, they were going to see the video, but they didn’t need to see the gunman coming in and hear the gunshots. They don’t need to relive that, they’ve been through enough.”

But for the public and other officials, the footage is enlightening — with many heavily criticizing the policemen’s response to the massacre.

“They just didn’t act. They just didn’t move,” Uvalde County Commissioner Ronald Garza said of the officers on CNN’s New Day. “I just don’t know what was going through those policemen’s minds that tragic day, but … there was just no action on their part.”

Following the backlash, the Austin-American Statesman defended its decision to release the lengthy video via an editorial written by executive editor Manny Garcia.

“Our goal is to continue to bring to light what happened at Robb Elementary, which the families and friends of the Uvalde victims have long been asking for,” Garcia wrote, later adding, “We have to bear witness to history, and transparency and unrelenting reporting is a way to bring change.”