What Drives Him Wild Based on His Zodiac Sign 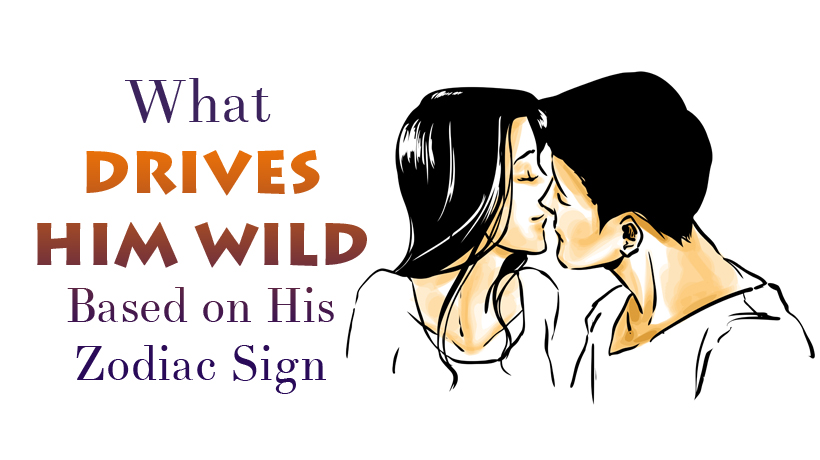 People crave different things from their significant others. You’re used to seeing what you want from a partner based on your zodiac sign  … but it’s time for a different take on this. Here’s what entices him based on his zodiac sign.

Aquarius (January 20th-February 18th)
An Aquarius man is drawn to the unpredictable. He’s free-willed – which is why he finds spontaneous and independent women exciting

Pisces (February 19th-March 20th)
This type of man values a poetic love, one that’s full of romance. He looks for a woman who is completely selfless – one who gives all of herself to everything and everyone – so that he, too, feels like he can give all of himself to her.

Aries (March 21st-April 19th)
Aries men are passionate and strong-willed. They’re always up for a little competition, so they absolutely love it when a woman can challenge them both physically and mentally.

Taurus (April 20th-May 20th)
If you’re in love with a Taurus man, then you know that the one thing he craves from you is stability. He’ll have been your friend for a long time before sharing how he feels about you. If he can be himself around you, he’ll fall for you even harder.

Gemini (May 21st-June 20th)
He’s used to being the flirty one, and he knows that he can easily draw people in. So when a woman plays his game of wits, he’ll be thrown off guard, and he’ll be completely enamored by you.

Cancer (June 21st-July 22nd)
Cancer men need a warm, welcoming woman. Just like Cancer women, they have a lot of strong emotions that they might not understand how to express. He craves someone who he can open up to comfortably.

Leo (July 23rd-August 22nd)
Leo men are enticed by women who aren’t afraid to be who they are. As a highly confident being, he wants to be with someone who’s equally secure in herself.

Virgo (August 23rd-September 22nd)
Virgos can be wary when it comes to love. What really makes him fall is a down-to-earth woman. He needs someone who he can talk to about anything, who won’t judge him for the way his brain overanalyzes everything.

Libra (September 23rd-October 22nd)
Libra men love it when they’re able to have an intellectual conversation with their partner. They also want their partner to help them and give them advice from time to time, especially when it comes to difficult decisions.

Scorpio (October 23rd-November 21st)
Just like Scorpio women, it can take a while for a Scorpio man to open up to people. But when he does, he’s an extremely intense partner, which is why he’s enamored by women who are just as passionate as he is.

Sagittarius (November 22nd-December 21st)
Sagittarius men want to be with someone who’ll stay up all night with them to talk about the meaning of life. They are intoxicated by women who have depth and have the ability to carry deep, reflective conversations.

Capricorn (December 22nd-January 19th)
Integrity, dignity and self-respect are three of the most important traits for a Capricorn man – which is why he’ll be attracted to a woman who exhibits them perfectly. He’s also deeply drawn to motivated women; if she has goals that she’s passionate about, he wants to support her every step of the way.