What's Your Biggest Insecurity Based on Your Zodiac Sign? 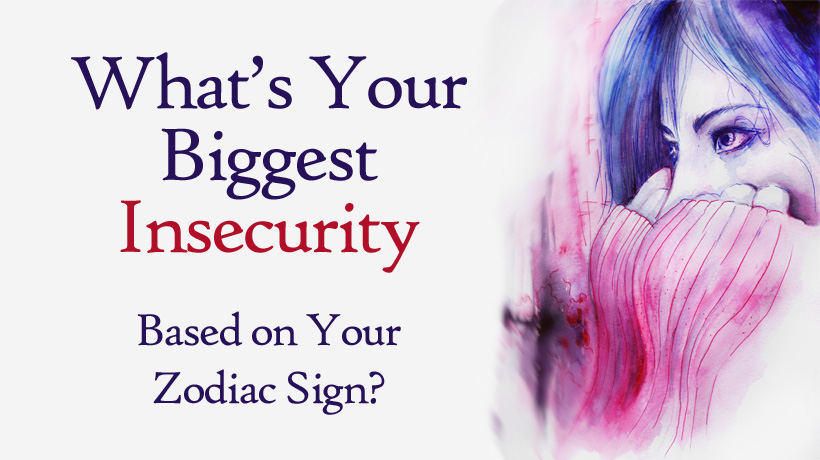 Let’s be real. All of us are prone to insecurities every now and then. Whether you’re worried you don’t quite fit in or struggling with a fear of failure, you’re not alone. Most people are in the same hole-riddled boat, desperately trying to stay afloat in a sea of social perception. Wondering if your zodiac sign can clue you in on your biggest insecurity?

Aries (March 21st – April 19th)
Aries are so bold and confident, it’s hard to imagine they have any insecurity at all. Used to being outspoken and adventurous, these confident fire signs have trouble asking for help when they need it. Their insecurity lies in the fact that they need to be the best at everything they do, which holds them back from accepting advice from others.

Taurus (April 20th – May 20th)
As a sign that craves stability, Taurus’ biggest insecurity is that they may actually become insecure in life. Whether that insecurity is the loss of a job, home, or relationship, Taurus is constantly looking out for what could be coming next. This stops them from living in the moment, as Taurus will be more concerned with controlling the future.

Gemini (May 21st – June 20th)
Geminis have a tendency to be superficial, which is why their biggest insecurity is caring too much about what others think. This air sign is prone to overthinking, which causes them to change their behavior based on who they’re speaking to.

Cancer (June 21st – July 22nd)
As a water sign, Cancers are very in touch with the emotions of themselves and others. But sometimes they can feel overwhelmed by their feelings, causing them to hold them out of fear of being judged by others. Cancers are insecure about their deep emotions and worry that not everyone will be able to handle them.

Leo (July 23rd – August 22nd)
As you may already know, fiery Leo prefers to be center stage. They’re outgoing, bubbly, and have a natural charisma. But Leo’s biggest insecurity is that these traits (or they themselves) will go completely unnoticed by others. Leo has a fragile ego, and many of their insecurities revolve around being forgotten or ignored.

Virgo (August 23rd – September 22nd)
Virgos will take the term self-critical to a whole new level. This earth sign strives for perfection and will beat themselves up if they fall short. Their biggest insecurity is that they or the work they do will never be good enough, which causes them to be unnecessarily hard on themselves.

Libra (September 23rd – October 22nd)
While a Libra can be known to play Devil’s Advocate, they actually hate confrontation, and would rather remain on people’s good sides. Their biggest insecurity is that they won’t be well-liked, which causes them to occasionally let people treat them like doormats.

Scorpio (October 23rd – November 21st)
Scorpios are the most intense of the water signs (and perhaps of all the signs) and can be extremely cautious or paranoid. This sign has some serious trust issues, and because of this, their biggest insecurity is that someone close to them will humiliate, expose, or judge them.

Capricorn (December 22nd – January 19th)
Capricorns are known to put their careers first. This ambitious sign would rather work than play, and their biggest insecurity is that they will fail. This is why they give their all for any task or project, no matter how small. But this fear of failure can hinder their relationships.

Aquarius (January 20th – February 18th)
Aquarians are so logical that many truly believe they have no emotions. But the opposite is true for this sign. Behind that cold exterior lies a fragile heart, and an Aquarius’ biggest insecurity is that they will be hurt once they finally reveal their vulnerable side.

Pisces (February 19th – March 20th)
Pisces, like Virgo, can be a bit harder on themselves than the other signs. Constantly trying to please and help others, they will happily let their own woes fall to the side. But with this utter devotion comes a fear of being a disappointment. Pisces gives their all in relationships but is still insecure that they aren’t worthy of receiving the same love.