What's Your Biggest Turn-On Based on Your Zodiac Sign? 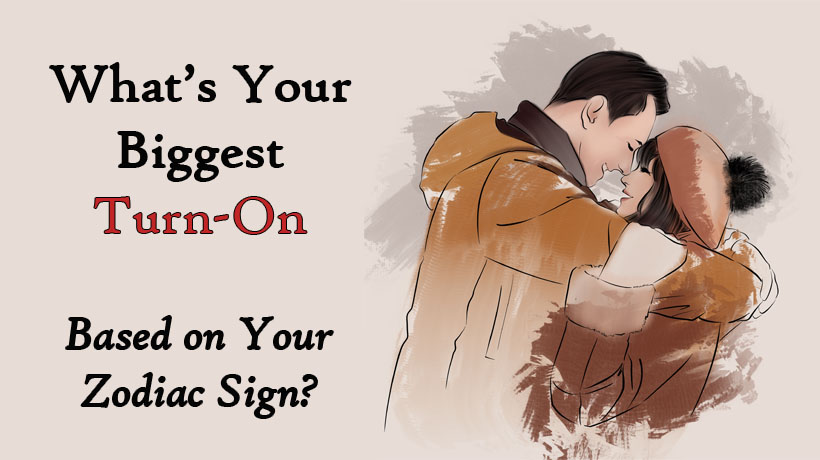 When looking at a potential partner, personality is hopefully the first thing (besides looks) that you’ll notice. It’s true that everyone has a certain quality that they’re most attracted to. However, you might find yourself more drawn to one characteristic in particular over others. According to your zodiac sign, here are the qualities you find the most irresistible in a mate.

Aquarius (January 20th-February 18th)
As an Aquarius, you are a free-spirited, highly intellectual person. What you desire is a man who also has an open mind. You want someone who can hold a conversation with you and who can keep things interesting. You dream big, so you’ll be attracted to others who do too.

Pisces (February 19th-March 20th)
You’re always the one who everyone comes to with their problems because you’re so in tune with other people’s emotions. The most attractive thing a guy can do is to be the one who listens to you for a change.

Aries (March 21st-April 19th)
As an Aries woman, you have the tendency to love a little competition. You find it incredibly sexy when a man is just as competitive and dynamic as you are, but is also able to respect your independence.

Taurus (April 20th-May 20th)
Your sign is the most grounded of the zodiac. You’re wary of sudden change. Because of this, you find it appealing when a man is consistent and reliable. Taurus women are also known to be romantics. You love it when a man does something, no matter how small, just to let you know he’s thinking about you.

Gemini (May 21st-June 20th)
As a Gemini, you’ll be most impressed with someone who will stimulate you intellectually and who will satisfy your curiosity. You are drawn to mystery; if you think there’s something worth exploring, you will.

Cancer (June 21st-July 22nd)
Those of your sign are known for being emotional – meaning it’s true that you tend to wear your heart on your sleeve. You’ll be drawn to someone who is able to understand you, even if you can’t vocalize how you feel or why you feel a certain way.

Leo (July 23rd-August 22nd)
Leo women love being the center of everything. You want to be admired and treated like royalty – the way you deserve to be treated. Taking this into consideration, the quality that you’re most attracted to in a man is attentiveness.

Virgo (August 23rd-September 22nd)
Virgos are serious enough already. You want someone who will make you laugh and make you forget (at least for a little bit) about always having to be practical and calculating. However, you still want someone who is also as intelligent and put together as you are.

Libra (September 23rd-October 22nd)
As a Libra, you look for someone who is both a good listener and a good conversationalist. You find it incredibly sexy when a man shares your love of learning.

Scorpio (October 23rd-November 21st)
Your sign is the most passionate of the zodiac signs. You find it irresistible when a man exhibits the same amount of passion as you do. Because of your curious nature, you’re also drawn to men who keep you on your toes.

Sagittarius (November 22nd-December 21st)
Sagittarius women are known for having a deep desire to explore new things. You are an extrovert, a risk-taker and you have an endless curiosity. You crave someone with a kindred spirit like yours – one that craves adventure just as much as you do.

Capricorn (December 22nd-January 19th)
As a Capricorn, you are disciplined and goal-oriented. You’re most attracted to a man who will respect your independence and who will support you in whatever you want to do.