Why He's Genuinely Drawn to You Based on His Zodiac Sign 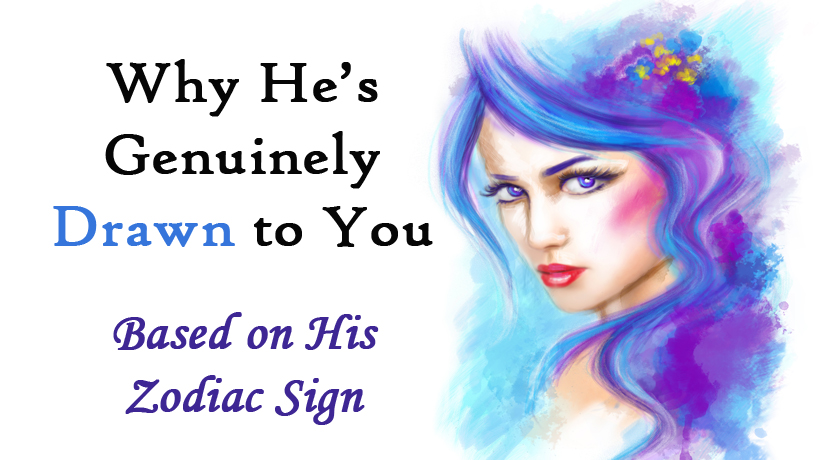 While there are many reasons a guy could be attracted to you, there’s usually one thing that really sticks out to him as your greatest quality. Find out what it is about you that he finds irresistible.

Aquarius (January 20th-February 18th):
He might hate it when you disagree with him, but it also turns him on. He feeds off of your intellectual conversation and he just can’t get enough of your mind. Sure, he’ll want you to eventually take his side but he loves the challenge regardless.

Pisces (February 19th-March 20th):
He’s super intuitive, and therefore he immediately senses your emotional investment. He loves being with someone who isn’t afraid to divulge their feelings in the most romantic ways, and he’ll gladly reciprocate.

Aries (March 21st-April 19th):
He goes crazy over your risky lifestyle, especially if he finds himself trying to keep up. As someone who is always in need of a challenge, he’ll truly respect you for your adventurous flair and he’ll always praise you for it.

Taurus (April 20th-May 20th):
The fact that you so perfectly fit into his routine warms his heart. He’s not the type of guy to force changes in your lifestyle, but he really appreciates a partner who accepts his inability to compromise and learns how to work with it.

Gemini (May 21st-June 20th):
As a true adventure-seeker, he loves being with a woman who keeps him on his toes. He really appreciates that you two can take turns planning your next journey together, for this gets his adrenaline pumping while it simultaneously reassures him of your affection.

Cancer (June 21st-July 22nd):
He not only wants an emotional partner, he needs one. He truly values a woman who expresses all of her emotions vividly so that there isn’t any room for doubt. This emotional availability will allow him to open up to you fully and be the supportive partner he wants to be.

Leo (July 23rd-August 22nd):
He needs to be praised, but he also hopes you can keep him interested. With a Leo, it’s sometimes best to provide some space in order to keep his ego at bay and allow the ball to be in his court for a little while.

Virgo (August 23rd-September 22nd):
Even though he may not realize it at times, he’s attracted to a partner who peels him away from his work sometimes. He needs someone who works equally as hard as he does but also knows when it’s time to have fun.

Libra (September 23rd-October 22nd):
He loves to lead a drama-free life, and he’ll seriously go nuts for a woman who does the same. He doesn’t want you to hide hidden meanings in everything you say or make him guess what’s going on, he wants everything to run smoothly so that your relationship can be fair.

Scorpio (October 23rd-November 21st):
He seriously appreciates it when you say what you mean and you mean what you say. Honestly with him, the more vocal the better. He basks in the glory of your honest relationship and wouldn’t trade it for the world.

Sagittarius (November 22nd-December 21st):
He can’t deny that he’s totally drawn to a bohemian woman. He finds the allure of someone free-spirited, independent and intelligent to be completely irresistible. You will charm him so hard that he might even become the clingy one…

Capricorn (December 22nd-January 19th):
In the case of dating a Capricorn, opposites attract. While he might be all work and no fun a lot of the time, he’s really attracted to a partner with an offbeat personality who knows exactly how to get him in the mood to have fun.