Why Immature Men Are Threatened by Powerful Women 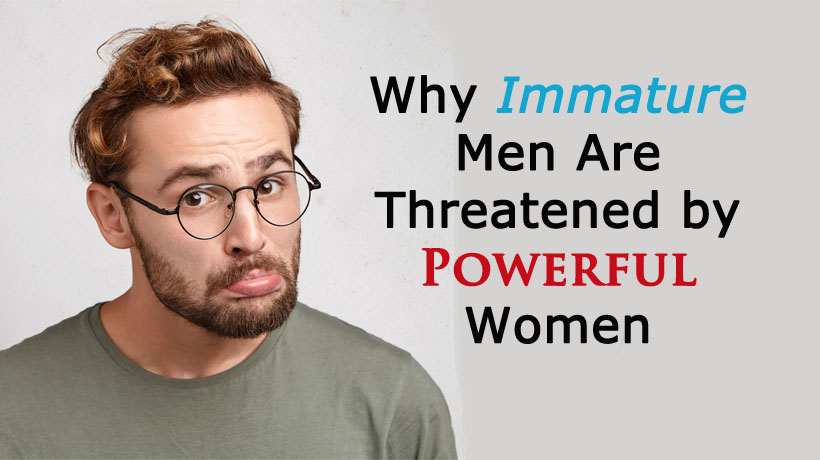 Generally, men like to take the wheel. Whether at work or in a relationship, the man, traditionally, thinks he needs to be the one in control. So when a strong, confident woman enters his life, an immature man might feel shaken up by her self-assuredness. Here’s why:

He’s knocked down to size
When he’s in her presence, he’s forced to recognize that she’s not there just to boost his ego. Instead, she’ll challenge him intellectually and won’t be afraid to call him out when he makes a mistake. She makes him realize that his idea isn’t always the right one.

He feels pressured to succeed
A man can expect a powerful woman to be supportive and push him to do better. This can be intimidating to an immature man, knowing that his actions are being watched. She’s also going to be the first to offer (constructive) criticism, which most immature men don’t like to hear. He might feel like he has to have a bigger paycheck, turning the relationship into a competition.

He tends to shy away from commitment
When a powerful woman dates a man, you know she’s going to be giving it her all. She knows what she wants, that’s why she chooses to be in a committed relationship. Immature men can be fickle when it comes to getting serious.

She’ll always speak her mind
A strong woman is not going to let anything get past her. If she’s feeling a certain way about something he did, she’s going to confront him. She’s not going to lie or make excuses, and that’s threatening to a man who is used to having people cater to him.

She’s not easy to impress
An immature man probably isn’t used to putting a whole lot of effort into relationships. To sweep this type of woman off her feet takes effort. James Michael Sama, a relationship expert at Huffington Post, said, “Do not shy away from strong women, and do not be intimidated by their passion for life. Instead, be excited that you have found your teammate. You have found your partner in crime.”