Why Narcissists Use the Silent Treatment & How to Respond 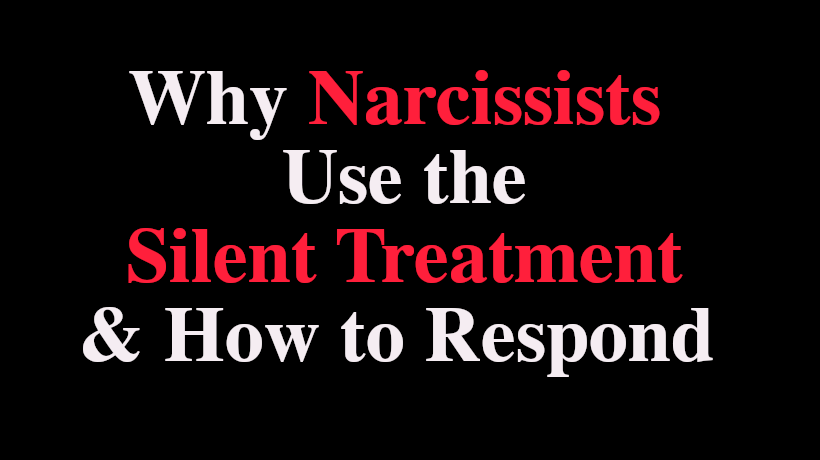 Having to endure the silent treatment isn’t fun for anyone. It makes you feel invisible, unworthy, and maybe a little bit sad or angry. Nothing but negative feelings arise from using the silent treatment. Using words (or lack thereof) as a weapon against others is unfair. Here are a few reasons why narcissistic people use silent treatment and a few ways for you to respond:

It Puts Them in “Control”

When you have problems with a self-centered person, it’s no surprise that they like to be in control. Social Worker and Psychotherapist Andrea Schneider says that narcissists will often demand that you apologize for your actions before they’ll speak to you again. “Because no further communication can ensue unless and until the narcissistic person decides to give the target another chance, a false sense of control is nurtured,” Schneider says.

It Makes You Feel Wrong

“The point of the silent treatment is to make the victim feel confused, stressed, guilty, ashamed or not good enough,” Mental Health Coach Darius Cikanavicius says. It makes you want to meet the needs of the abuser in the hopes that they may speak to you again. According to Cikanavicius, the result of the silent treatment is exactly what the person with narcissism wishes to create: a reaction from the target and a sense of control.

It Helps Them Avoid Compromise

Cikanavicius also says that enduring the silent treatment from someone makes you want to avoid all future conflicts with them. It makes you lower your boundaries and shows them that they do not have to compromise anything to get your attention. Schneider says that sometimes, a person with narcissistic qualities will decide to abandon the relationship when his or her partner presents an ultimatum or attempts a resolution that requires compromise.

Schneider, Cikanavicius, and Health Writer Ann Pietrangelo all share keys ways to respond to a situation where a person thinks they are controlling you with the silent treatment:

What Not to Do

Along with some tips on how to handle the situation, Pietrangelo provides a list of things you shouldn’t do when faced with the silent treatment: