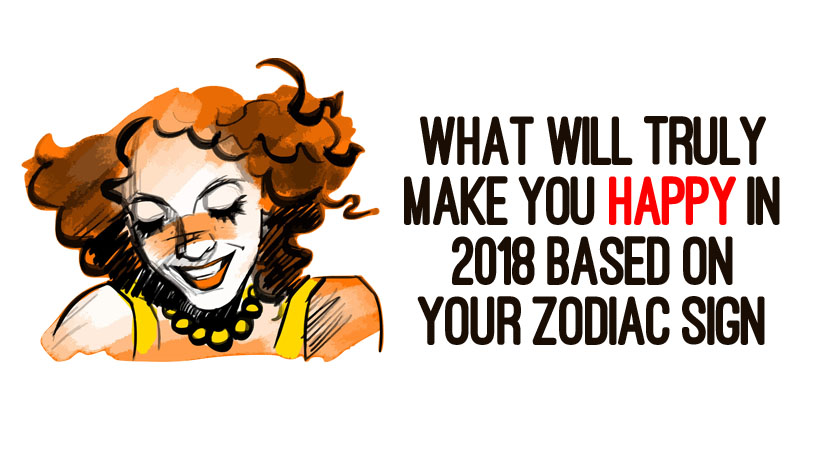 If you can believe it, we’re already nearing the end of the first month of 2018. If you haven’t yet felt that the new year has taken a turn for the better, read on to see what may turn things around.

Aquarius (January 20th-February 18th)
As an Aquarius, you cherish your independence wholeheartedly but you can also be a bit of a people-pleaser. In 2018, you’ll feel a sense of relief in direct and honest conversations rather than those that tell people exactly what they want to hear.

Pisces (February 19th-March 20th)
2018 will be the year where everything you’ve bottled up will come rushing out, which could be a catch 22. You’re focused on some big pursuits, but before delving into them you’re desperate to nix an old habit or revamp a lifestyle change you’ve been keeping on the back burner.

Aries (March 21st-April 19th)
Although 2018 will be a year of some turbulence for you, your persevering attitude will prove to set you apart. Carving out some extra downtime this year will allow you to keep your momentum going and keep you smiling in the long run.

Taurus (April 20th-May 20th)
Major changes are headed your way this year, Taurus, and the key to building them is through connections. Nurture your relationships with those whose skills complement yours or help inspire you to maintain the right mindset.

Gemini (May 21st-June 20th)
2018 will be the year you take care of business—both personally and professionally—and you’ll surely reap the benefits as a result. Prepare to face any fears in your love life, explore investments and real estate to boost your financial success and reset yourself through nature and fresh air every once in a while—you’ll be glad you did.

Cancer (June 21st-July 22nd)
You sometimes forget to make time for play, Cancer, but some unexpected plot twists this year in relationships or in your career may permit you to take advantage of some creative energy.  Staying present is key for your happiness in 2018.

Leo (July 23rd-August 22nd)
Your relationships and priorities will begin to shift this year, and some hard decisions will be made as a result. You’ll need to say ‘no’ to a few things in order to look out for number one – but your emotional well-being will truly thank you.

Virgo (August 23rd-September 22nd)
Your friendships will be fruitful this year as you focus your new energy on getting involved with the community and mingling with new faces. You’ll be glad you came out of your shell.

Libra (September 23rd-October 22nd)
You’ll feel a lot more attraction to security this year – perhaps you’ll find a great catch, get a promising raise and look to settle your roots. The abundance you’re expecting this year will serve as a big confidence-booster.

Scorpio (October 23rd-November 21st)
Now that you’ve rid yourself of the things that were heavily weighing you down last year, you’re seeing whole new possibilities and dreams you can pursue. Don’t forget to expand your horizons through higher learning or travel—it’s what really gets you going.

Sagittarius (November 22nd-December 21st)
You’re a go-getter but you’ve seen firsthand that forcing things to happen is a recipe for disaster. Resist the urge to control and allow the universe’s plans to fall into place. Surrendering your battles will actually be in your best interest.

Capricorn (December 22nd-January 19th)
2018 will be a year of new chapters and exciting ventures, and sweet stability could come into your home life at last. Be sure to take inventory of the areas in your life that could really benefit from these makeovers.