Our new web series, Women of Impact: Inspiring Action and Change, launches today. The impulse to create Women of Impact came from the turbulence in the world and the need for more women to step up at all levels. Something happens when two or more women come together with the intent of creating change.

The series begins with Rose Stuckey Kirk, the Chief Corporate Social Responsibility Officer and President of the Verizon Foundation. Here are a few moments from her special interview. Be sure to look at the full segment below. 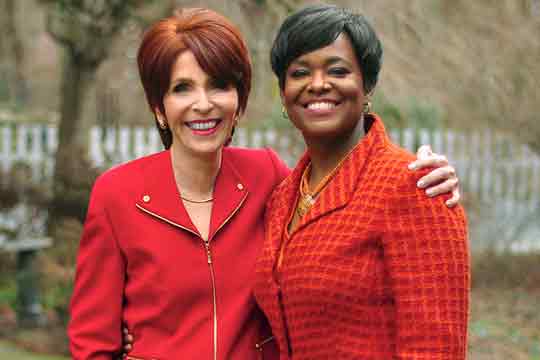 Rose shared with me what it was like growing up as 1 of 8 kids to parents who encouraged her to take risks. From a journalism student in college, her career took many turns. Rose is tenacious and finds the “blessing in the burden.” When her husband suffered a stroke several years ago, she took on a new position which allowed her to devote more time to her family. Little did she know, it would become her dream job. Among her responsibilities, she is the President of the Verizon Foundation. In describing one of the areas they have contributed to, she says, “…we believe that technology is now the new literacy. So we built a whole range of programs that put underserved individuals – women, little girls and people of color – on the path toward having amazing careers in science and technology and engineering and math.”

When asked about overcoming obstacles in the workplace, she shared candidly, “You know, I’m not naïve, I know that sexism exists, I know that racism exists, I mean, I grew up, you know, a little black girl in Arkansas. And so I certainly have seen and felt and been, you know, victimized to some degree by it.  But I can’t allow that to stop me from continuing to move forward. And so what you then need to do is be ready to perform and to deliver. And to hold onto your power. And not let difficult bosses or people that you perceive aren’t supporters take away your power.”

Stay tuned for more segments of women of impact: