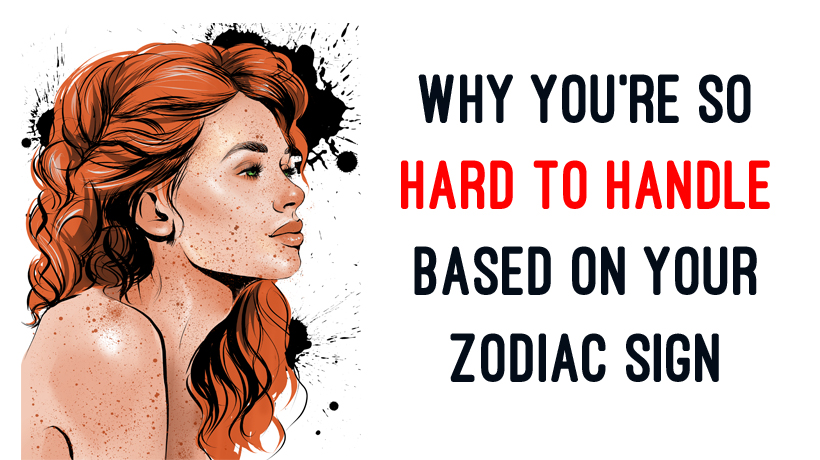 Some people are just easier to get along with than others. Here’s what makes you a bit difficult to be around sometimes (according to your zodiac sign).

Aquarius (January 20th-February 18th)
An outsider might think that an Aquarius woman is demanding or pushy, but they know this isn’t true. You simply know what you want – and you’re strong-willed enough to go and get it.

Pisces (February 19th-March 20th)
You’re relatively easygoing. You always act with other people’s best interests in mind. Because of this, people never really think that you’re too much to handle.

Aries (March 21st-April 19th)
As an Aries, you are an ambitious and fiery individual who certainly isn’t afraid to speak her truth. However, the littlest things can sometimes set you off- and your short temper can be tough to deal with at times.

Taurus (April 20th-May 20th)
Taurus women are known for being set in their ways – you really aren’t too fond of change. Your stubborn nature can make people feel like they’re talking to a brick wall. It would serve you well to open your mind a bit more to new possibilities.

Gemini (May 21st-June 20th)
There is a duality to your nature that makes you a bit difficult to understand at times. You constantly struggle between wanting to freely speak your mind and withdrawing into yourself.

Cancer (June 21st-July 22nd)
As a highly emotional being, you can sometimes have trouble expressing the many things that you’re feeling. This can be a point of frustration for others who want to get close to you.

Leo (July 23rd-August 22nd)
Leos love to be in the center of attention. This leads people to assume that you have an overinflated ego – but you know that this is far from the truth. Even though you love attention, you also love to give attention and make those around you feel like stars.

Virgo (August 23rd-September 22nd)
Virgos can be hard to handle because of their overly analytical and cautious nature. You are never one to make a decision without first thinking through it (which is far from a bad thing). However, you should practice letting loose every once in awhile.

Libra (September 23rd-October 22nd)
Libras love to accommodate people and make sure that everyone around them is content. Although this is a nice gesture, it can lead you to be a little overbearing  – you may end up losing  a bit of yourself in the process as well.

Scorpio (October 23rd-November 21st)
Your sign isn’t quick to trust people – whenever someone gets remotely close to you, you slowly fill yourself with doubt. Your closed-off nature can irritate the people who truly care about you.

Sagittarius (November 22nd-December 21st)
As a Sagittarius, you are known for your intense curiosity and lust for life. However, this can lead you to feel like you need constant entertainment – and when someone bores you, you become disinterested. Try to take other people’s feelings into consideration more often.

Capricorn (December 22nd-January 19th)
To a Capricorn, everything is methodical. You are driven by your goals and your goals alone. Because of this, you can sometimes let the people you love fall by the wayside, which can be immensely frustrating for them.