10 Signs of an Egotistical Personality 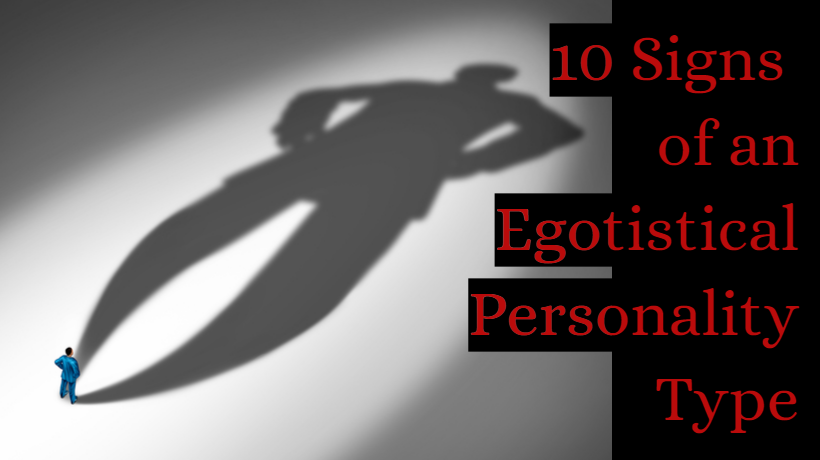 We all know at least one person who takes the meaning of “self-love” a little too far. Being confident in yourself is important, but when it crosses over into inflated self-importance, it may be a sign of a problematic big ego, otherwise known as an egotistical personality type.

“Being egotistical is often synonymous with being selfish or self-centered,” Erin Dierickx, LMFT, a licensed marriage and family therapist associate, explained to Bustle.

There is a difference between being egotistical and being narcissist, although the two can have a lot of overlap. In the case of narcissism, New York Magazine’s The Science of Us explains that narcissists are defined by three traits: an unrealistic sense of their own superiority, entitlement, and a lack of empathy for other people. Similarly, signs of a big ego include inflated self-confidence, blindness to personal flaws, focus on self over others, and difficulty seeing other points of view. Both cases prioritize the individual self over others in a way that can be unhealthy or seen as annoying by other people. But in the case of narcissists, the extreme lack of empathy and sense of entitlement marks a clear distinction between a big ego and a legitimate personality disorder.

For people with big egos, a simple change in perspective and awareness of their behavior can make a huge difference in their personality. In fact, one of the easiest ways to fix this issue can simply be taking the time to express more interest in others and their lives.

“Ask more questions and challenge yourself to learn something new,” Dierickx suggests. Getting involved in community projects can be a great way to help cultivate a sense of humility. Therapy is also a good option. “Individual or group therapy can be powerful ways to bring attention to your behaviors and how they affect others,” Dierickx says.

So what are the telltale signs of a big ego? Here are 9 tip-offs that someone might be a bit too big for their britches:

If you place excessive importance on material things, this trait can sometimes be a sign of a big ego.

“The ego identifies with having: having more, better, and the latest,” says licensed clinical social worker Scott Dehorty, LCSW-C. “We can end up identifying who we are by what we have.”

There’s nothing wrong with enjoying material objects and being excited to show them off, but when our belongings start to take over our identity and interests, that’s when it’s worth taking a step back and reevaluating.

Dehorty suggests asking yourself a few questions: “Why do I want people to see me with these things?” and “What value does this have to me beyond showing off?”

Engaging in gossip is another common sign of a self-centered personality. If you find yourself constantly criticizing or complaining about people to others, there’s a chance it’s related back to your personality. “Complaining strengthens the ego,” says Dehorty. “That is likely the ego feeding itself.”

How our parents raise us as children can have a significant impact on our personalities later in life. If you received an abundant amount of praise as a child, there’s a chance that this could evolve later into a exaggerated sense of entitlement and superiority. Of course, while this effect isn’t necessarily you’re fault, it does give you the chance to look back and reflect on how childhood could have impacted your personality.

“If you catch yourself expecting lots of praise or feeling unduly hurt when you don’t get the things you want, check yourself before it turns people off,” says Bustle.

Experts agree that consistently interrupting conversations is often a sign of a big ego. Egotistical people tend to interrupt others because they feel that what they have to say is much more intelligent or important, clinical psychologist Nancy Irwin, Psy.D., told Bustle.

Having a competitive edge isn’t a poor quality, but when it veers into unhealthy territory, it can be a pretty clear sign of a big ego. Many times, competition can tap into people’s insecurities, and for those with inflated egos, losing a game feels embarrassing, as it can confirm their worries of inferiority, according to Irwin.

Because people with big egos are so self-involved, they may be lacking genuine connection with others.

“You might leave a social gathering and realize that you don’t remember what anyone else said, or that you don’t have strong feelings about what they said — unless it was a negative response to your ideas or how much time you took to discuss them,” psychologist Robin Hornstein, Ph.D., explained to Bustle

One way to work on fixing this issue is recognizing in the moment the importance of listening and paying attention to others.

Egotistical people are usually not the best at sharing the spotlight, if that hasn’t been made already clear, so sharing the credit for accomplishments is usually a challenge.

“It is OK to have high expectations of one’s self, but portraying yourself as the greatest person alive will certainly contribute to being egotistical,” Dr. Kruti Quazi, MA, LPC, a licensed professional counselor, explained to Bustle.

No one has an easy time admitting when they’re wrong, but for people with big egos, it can feel nearly impossible. According to  A.J. Marsden, Ph.D., an assistant professor of human services and psychology at Beacon College, these people are more accustomed to blaming others instead of recognizing their own faults.