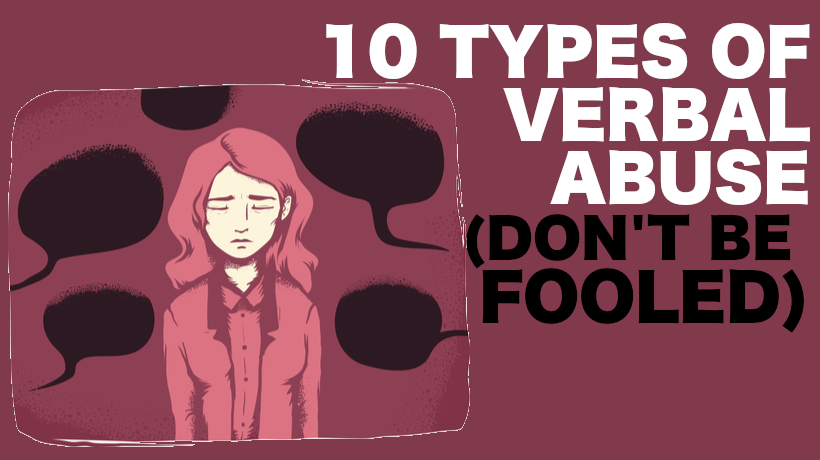 Some people may think that verbal abuse is easily recognizable in a relationship, but that isn’t always the case. It’s not always as obvious as being screamed at or spoken down to. Many women can find themselves in relationships where they are being verbally abused and they don’t even realize it’s happening. Berit Brogaard, D.M.Sci., Ph.D., helps us identify the different categories of verbal abuse so we won’t be fooled:

Brogaard states, “A person who withholds information refuses to engage with his or her partner in a healthy relationship. He or she does not share feelings or thoughts.”

This type of verbal abuser tends to enjoy being argumentative. Brogaard gives the example, “The victim of the abuse may share her positive feelings about a movie she just saw, and the abuser may then attempt to convince her that her feelings are wrong. This is countering, or dismissing the victim’s feelings, thoughts, and experiences on a regular basis.”

A verbal abuser tends to make their victim believe they have no right to his or her thoughts or feelings. Sometimes it comes off as criticism. “The abuser may tell the victim on a regular basis that he or she is too sensitive, too childish, has no sense of humor, or tends to make a big deal out of nothing. The abuser thereby denies the victim’s inner reality, indirectly telling a partner that how they feel and what they experience are wrong.” says Brogaard.

Sometimes verbal abuse is disguised as a joke to make the victim question themselves. For example, constantly saying mean or critical comments followed by, “It was just a joke!”

Brogaard states, “An abuser practicing this form of abuse may tell the victim that she is talking out of turn or is complaining too much.”

6. Accusations and the Blame Game

Have you ever been accused or blamed for something out of your control? This is an example of verbal abuse.

Patricia Evans author of The Verbally Abusive Relationship states that, “Most ‘you’ statements are judgmental, critical, and abusive.” Some abusive judging and criticizing “you” statements are: “You are never satisfied”; “You always find something to be upset about”; and “No one likes you because you are so negative.”

To some these topics may seem too trivial to pick on, but not for a verbal abuser. Verbal abusers will undermine the most insignificant things such as choice of food, style choices, etc. You may begin to question the way you think or your opinions with this kind of abuse.

Name-calling, abusive anger, screaming or being yelled at in this manner might be what most people have in mind when they think of verbal abuse.