How to Act, Not "Re-act" when emotionally triggered 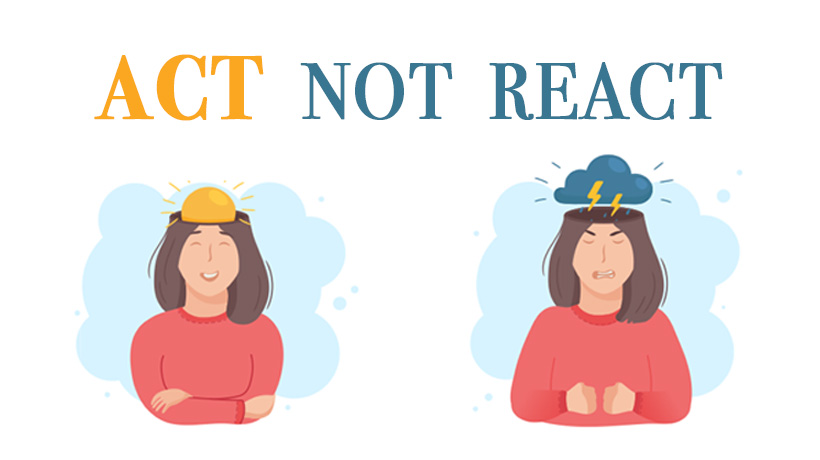 You’re sitting in a meeting and a leader turns to you and says “why did you do the analysis this way?”

What happens next? You react. What’s your tone? Defensive!

You can feel all the energy drain out of your body. You can barely listen for the rest of the meeting as your head is in a mental swirl. Then you shut down, and hide until the end of the meeting. But it doesn’t end there. You’re thinking about it in the back of your mind for the rest of the day, and maybe even re-enact the scene with regret as you roll around at 2 am.

The same thing happens in your personal life when you text a new friend and you don’t hear back. You might feel rejected, “do they not want to talk to me?!” You might be mad at them for being so rude. You might be tempted to talk negatively about or avoid them.

In these situations what happens is that you want to show up in a certain way – confident, positive, and collaborative. But in the heat of the moment, you react – not act with intention.

What does it mean to ‘react’? It means that a prior way you’ve experienced yourself gets ‘re-activated’ in the situation.

For example, if you believe deep down that you are ‘not good enough’ then when the leader asks you a question you’ll re-activate that doubting belief about yourself and feel bad. You’ll think ‘that leader is asking me that question because he thinks I don’t know enough to be in my position’. You act with emotion that is not proportionate to the situation because in your mind it’s not about the current situation, it’s about all the years of questioning yourself. It’s like striking a match to kindling to create a fire.

Here are 3 tips to Act not React

1. Be clear who you want to show up as – Many women want to feel more in control of how they come across – less reactive and more intentional so you can put your energies into making a difference. To do that you want to have a clear idea of the outcome you want in any situation and who you need to show up as in order to accomplish that outcome. Ask yourself first “what is the outcome I want in this situation?”. Then ask “who do I need to be in order to start making that happen?”

It’s worth it to take the time to figure out what qualities and attributes you want to show up with – usually this is at the intersection of your strengths and what others need from you in your in your work or in your family.

For example, if you knew before you came into that meeting you wanted to be a confident, collaborative contributor then when the leader asked you a question you could have asked yourself “how can I help all of us get to the right answer here” instead of taking it personally. Knowing who you want to show up as gives you the anchor of a ‘horizon point’ to focus on and move toward.

A great exercise is to require yourself to look at the situation from at least 3 perspectives before you allow yourself to act. Look at the factual context, you’ll learn so much more about the other person’s motivations, about any break down in communication, and about yourself. Looking at the facts of the situation also helps you get out of the part of your brain that’s in emotional hijack, and shift into the thinking part of your brain. Then its easier to give other people benefit of the doubt.

For example, rather than accusing you of not knowing your stuff, maybe that leader
– was genuinely interested in knowing more detail about the numbers
– wanted to double-check on the origin of those numbers because he knew he’d have to defend those numbers with his colleagues
-was showing a lack of self awareness by asking a question beginning with ‘why’ which tends to make people feel judged

If you could interpret the situation with any of these ‘stories’ you would have seen the opportunity to move the work forward rather than about your worthiness. You would have seen there was an opportunity to be even more helpful to that leader. That would help you feel more in control and less emotional about it. Seeing the facts of the situation and having an intention of who you want to be will lead you to the best way to respond.

Now that you know a reaction comes from an underlying way you think about yourself, use that information to strengthen yourself. If you have a concern you ‘don’t know enough’ at work, you don’t have to stay stuck thinking that way! You can either “accept” yourself for who you are and find a role that makes the best use of your current talents, or else “accomplish” the next level by new learning new skills so you don’t have to doubt yourself again.

Feeling rejected by a new friend who doesn’t get back to you is making that person’s behavior determine whether you are a likable human. It’s putting too much pressure on other people who are caught up in their own lives to make you feel good about yourself.

Instead, like yourself. Fill yourself up. Use any triggering situation as an opportunity to go even deeper into asking “what really brings me joy?” or “how can I grow the qualities I want to see in myself?” Put your energy into people and passions that make you feel alive

You can use any moment of reaction to realize that you are playing small. Because when you react, you over-focus on that moment and how it seems to forecast what you think you can have in your life. When you like yourself, it frees you up to see the big picture and abundance in the world. For example, it’s not your only moment to be in front of that leader. Or maybe that leader has a difficult personality and you want to question whether it’s the right fit for you- maybe there is a role where your talents will feel more valued. When you like yourself, you always have company you can enjoy! It will help you see there are many people in the world who would want to have you as a friend.