4 Signs That a Boyfriend Will Make a Great Dad 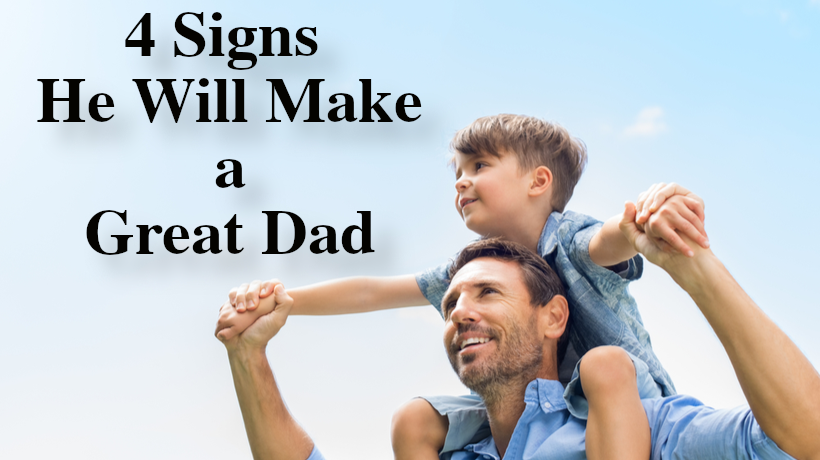 Your guy may be a great boyfriend, but what if you want kids? How do you know if he’s going to help you raise happy and healthy children? Do six-pack abs mean five-star parenting? Science can help you decide if your man makes the cut.

In a study from the University of Connecticut, results showed that parental acceptance of a child was highly correlated with the child’s adult personality. If you think about your partner, is he accepting? Or is he more judgemental and rejecting? The study shows that parental rejection can have serious negative effects on a kid’s personality. If your man isn’t very accepting, he might not make a great dad. But he also doesn’t sound like a great boyfriend.

He has a positive outlook.

A study from Concordia University showed that fathers who use parental control (physical punishment, material or social consequences, reasoning, scolding, and reminding) in a more positive way, raised smarter children with less sadness, social withdrawal, and anxiety. If you would describe your boyfriend as a pretty negative person, he’s probably not the baby daddy you’re looking for. Does he get really upset with you over little things? Then he probably won’t be great at dealing with your kids.

He’s involved with family and friends.

Does your partner spend a lot of time with you or his friends and family? A study on working fathers published in the Academy of Management found that fathers who spend more time with their kids “experience greater job satisfaction and work-family enrichment and less work-family conflict, and they are less likely to think about quitting their jobs.” So if your guy is a serious workaholic or just doesn’t spend much time with his loved ones, he probably won’t spend a lot of time with the kids and will be a lot grumpier at the end of the workday.

Maybe your boyfriend spends a lot of time with you, but is he actually engaged with you? Or is he just watching the TV and ignoring you? A study published in the Journal of Child Psychology and Psychiatry showed that “disengaged interactions of fathers with their infants, as early as the third month of life, predict early behavioral problems in children.” So if your man isn’t paying attention to you, he probably won’t pay much attention to your kids.

Maybe your amazing boyfriend is just that: a boyfriend. He might take you on wonderful weekend getaways to Paris or pick the best restaurants, but how good is he at changing diapers and bandaging booboos? If you’re seriously considering starting a family, you need to seriously think about who you’re going to share that tough but wonderful journey with.

Study from University of Connecticut on Parenting and Personality

Study on Fathers’ Influence on Children from Concordia University