Narcissists Never Take the Blame for Their Actions...5 Things They Do Instead 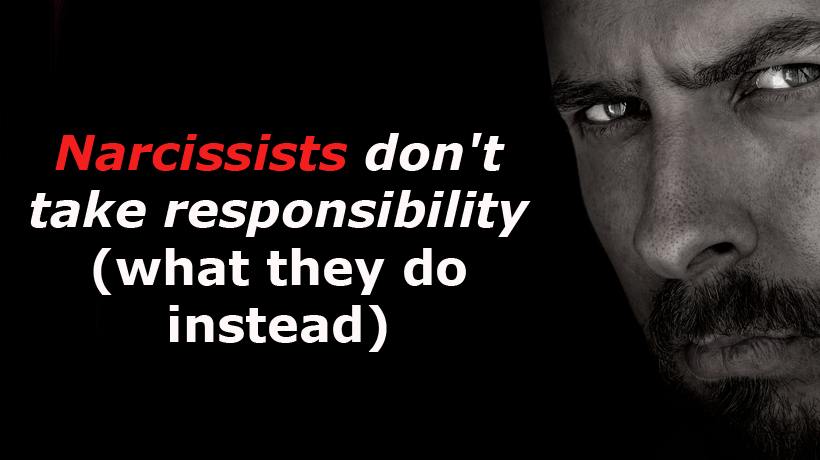 Do you know someone who never admits to being wrong? Do they think way too highly of themselves? Jessica Yakeley, a consultant psychiatrist in forensic psychotherapy, defines a pathological narcissist as someone with extremely low self-esteem. They protect their self-image by always exaggerating how great they are and bringing others down. Here are some behaviors to look out for if you suspect you’re dealing with a narcissist:

Dan Neuharth, Ph.D., MFT, a licensed marriage and family therapist, says “Narcissists lie easily and often seem entirely convinced of even their most preposterous lies. They work tirelessly to present a perfect, shining facade.” Christine Hammond, MS, LMHC, a Licensed Mental Health Counselor, says that narcissists “make excuses and rewrite history” in order to escape responsibility. They will try to make you question yourself instead of them. If they can change the “truth,” then they can escape any blame.

Neuharth says that narcissists will try to put you on the defensive and have you explain yourself to make you doubt yourself. This is another way they try to change the facts they won’t accept. “A sense of victimhood or entitlement is common, with the patient blaming others for treating them badly or criticizing them for faults that they see in other people but deny in themselves,” says Yakeley. To get the attention off of their faults, they’ll distract you with yours.

If they don’t use your faults to distract you, they may use them just to hurt you. “The narcissist begins by bullying the person endeavoring to hold them accountable. Frequently they resort to name-calling and belittling,” says Hammond. Shirin Peykar LMFT says, “Their goal is to lower other’s self-esteem so that they can increase their own because it makes them feel powerful.” These people are characterized by low self-esteem, so if they can’t boost themselves up, they’ll pull you down to their level to make themselves feel better.

Arguing, in general, can be tiring, but a narcissist will really try to wear you down. “The narcissist picks one small detail and argues it to the umpteenth degree. If the other person argues back, they pick another tiny point and persistently wear down their opponent.” They keep doing this until you give up and decide it’s just not worth it to argue with them anymore. It’s a clever and effective escape tactic for them.

If this person has left, or threatened to leave you during an argument, they may be a narcissist. “Narcissists cast off others when the narcissist feels his or her needs are unmet,” Neuharth says, referring to their need to feel constantly adored by others. “Eventually,” Hammond says, “the other person confronts the narcissist about a lack of responsibility and then the narcissist retreats. The withholding of love/attention/time is so dramatic that the other person becomes horrified and assumes responsibility so that the narcissist will return.” If someone is using their love as a bargaining chip, that’s a sign of an unhealthy relationship and a potential narcissist.

10 Things Not to do With Narcissists

7 Tactics Narcissists Use to Escape Responsibility