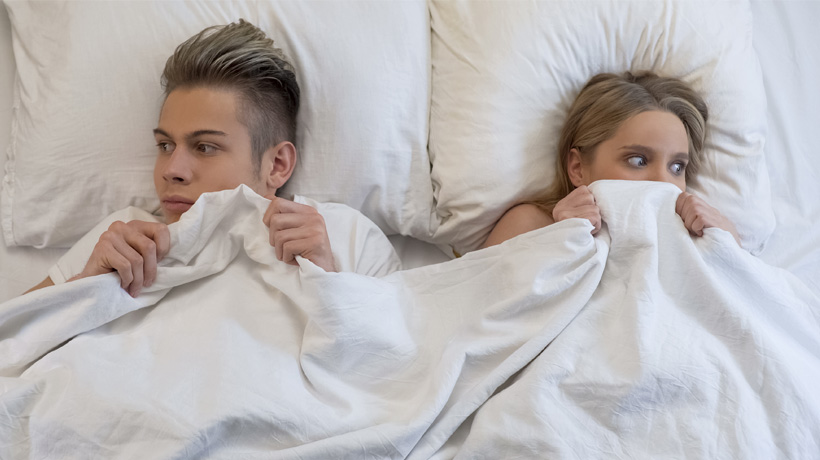 So girl, congrats! Chad from Retro Fitness has finally popped the big question: will you be his girlfriend?? And you of course, pop an answer right back: yes!

I mean come on, you’ve been drooling over this guy’s overhead triceps extensions for weeks. It’s about time y’all started a partner workout routine, if ya know what I mean 😉

Fantastic. So now it’s two months in and everything’s all rainbows and dumbbells, if you will. But then he drops a 5 lb medicine ball on your left pinky toe and things get . . . a little dicey. What else could go wrong, you ask? Read on to find out (and to learn how to deal).

The all-too-sober morning after
Getting drunk with Chad for the first time can be daunting enough in its own right. You worry that he’ll cry to you about the last season of Lost or worse — that he’ll tell you he loves you when he’s 10 shots deep.

However, if it turns out that Chad’s most serious drunken red flag is just one too many moonwalks, and you guys do in fact make it to the morning after, things might still be a little awko. Perhaps, for instance, you suddenly remember that your intoxicated alter ego, Martha, told him about that embarrassing time you peed yourself during an ethics exam. Or maybe Martha used his fingers to audibly count all of the UTIs you have ever had your life.

Whatever uncomfortable thing either of you said or did that night, you are going to have to confront it when you wake up. I think the best way to deal is to laugh off the small stuff, and to either talk about or arrange to talk about the more serious drunken admissions.

Bae has overstayed
You are head over heels for Chad. But wait . . . are you really? Because girl, you have not worn your heels — let alone any pair of shoes — in days. The two of you have literally become vitamin D deficient from being inside for so long.

When bae overstays, you gotta boot him out. You have things to do! People to see! You are a working woman. Don’t be afraid to put your foot down and kick him out (gently — use your soft Keds, not the ones with rhinestones on the toes) when he really needs to go.

Time apart? What’s that?
If you begin to notice that “time apart” from Chad is really just you spending time with the mini, iPhone-sized version of Chad, then it’s time to draw yet another line.

The things that will keep your relationship exciting are the things that you develop and take an interest in independently.
So go pursue your side hustle, take a spin class, and catch up on some reading! And no, you cannot bring your cardboard cutout of Chad to any of these activities.

Yep, it’s “Ex”actly what you’ve been dreading
Well, well, well. The time for that dreaded “ex” conversation has finally happened.

No one wants to talk about the mistakes they’ve made, and if you’re no longer dating him, chances are your ex was one of them.

This impending conversation can bring you heaps of anxiety, but take a deep breath. Just be authentic and reveal the relevant facts. If you want Chad to know that you would like to commit but are still a bit hesitant due to trust issues in your past, let him know.

You don’t have to tell him about your ex’s favorite Marvel movie or about how heavily he used to snore on Tuesday nights. That’s not the point of this conversation. Tell Chad what he needs to know, and leave the rest in your previous relationship.

Crappy conclusions
Crap, you’re at Chad’s house and you just have to go. Not just go… like go go. What do you do?

Well, you go! Even if you’re embarrassed to use his bathroom, this moment was bound to happen eventually, so embrace it when it comes. You and Chad are both human beings with human tendencies. Consider this a humbling experience.