Which Stranger Things Character Are You Based on Your Zodiac Sign? 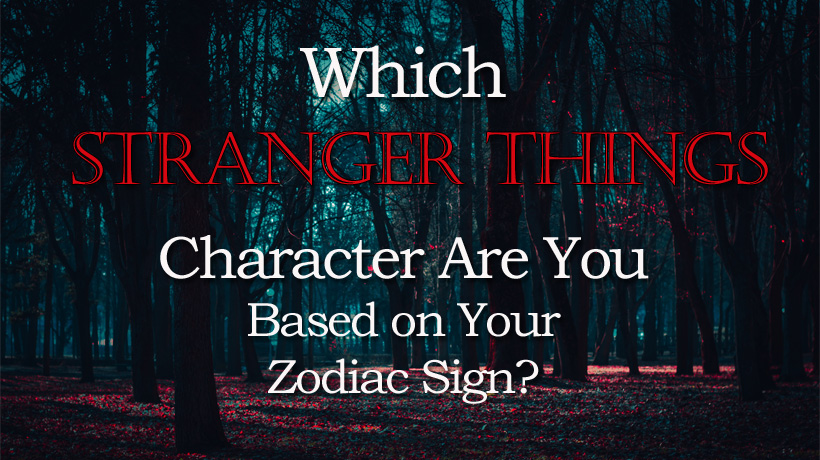 Whether you’ve got your own account or you’re using someone else’s, you’ve probably noticed that the hit series Stranger Things is back for season three on Netflix. Yes, that means most of our favorite characters are back (sorry Bob) and better than ever, ready to tackle whatever malevolent entities crawl out of the Upside Down. Wondering if your zodiac sign is best represented by Will, Dustin, Mike, or Eleven? Here’s which Stranger Things character you are based on your zodiac sign.

WARNING: Some season three spoilers below

Aries (March 21st – April 19th): Max Mayfield
With her bright red hair and fiery personality, and penchant for control, MadMax is most definitely an Aries. She’s strong-minded, confident, athletic, and she doesn’t take crap from anyone. After all, she did break up with Lucas five times, meaning this girl not only has a temper, she clearly knows her worth. Just like an Aries.

Most on-brand quote: “Say you understand. Say it!” Because an Aries is always right.

Taurus (April 20th – May 20th): Joyce Byers
Tauruses are determined, stable, and incredibly stubborn in their beliefs, which describes Joyce Byers perfectly. Did she give up after Will’s lengthy disappearance in season one? Nope. Even after they pulled his “body” from the water as proof? Not a chance. Is she just as adamant about kicking ass, taking names, and protecting her children in season three? You bet. Typical Taurus.

Most on-brand quote: “I will never, ever let anything bad happen to you ever again. Whatever’s going on in you, we’re gonna fix it.” Because a Taurus can fix anything.

Gemini (May 21st – June 20th): Eleven
Geminis are ruled by Mercury, the planet that controls communication, technology, and the mind. Eleven may be a girl of few words, but she’s definitely got a lot going on up there, and she’s continuously learning new ways to communicate. She also loves being with her friends, and by season three, she’s fully versed in the ways of gal pal gossip, even using her channeling powers to spy on her boyfriend, Mike.

Most on-brand quote: “I dump your ass.” Because Geminis don’t need you.

Cancer (June 21st – July 22nd): Mike Wheeler
Cancers are sensitive, loving, and compassionate: all characteristics that describe Mike. Mike shows extreme love for his friends as well as his girlfriend, Eleven. He’s also a great host, since it seems like the gang spends most of their time together in his basement. Mike is easily hurt by his friends and girlfriend as well –– a typical Cancer trait, as these signs can be delicate.


Most on-brand quote: “We are treating her like some kind of machine when she’s not a machine, and I don’t want her to die looking for the flayed when they’ve obviously vanished off the face of the earth.” Because a Cancer will care about you more than you care about yourself.

Leo (July 23rd – August 22nd): Lucas Sinclair
Lucas is boisterous, charismatic, loyal, and has a big heart –– just like a Leo. He’s not afraid to state his opinions, even if they may be controversial (hello New Coke over Classic Coke). But like a Leo, he also loves loves and cares deeply about his relationship with Max. Who else but a Leo would get back in their partner’s good graces by buying them shiny new gifts?

Most on-brand quote: “Don’t be a pussy. Fireball him!” Because Leos never back down from a challenge.

Virgo (August 23rd – September 22nd): Dustin Henderson
Virgos are extremely analytical, which means they’re constantly thinking of different theories or strategies. They’re also a great person to go to when you’re looking for answers. For this reason, Dustin is definitely a Virgo. He gives great advice to his friends and is always ready with a solution (i.e. using his radio tower to guide Hopper and Joyce through the Russians’ secret underground lab). Virgos are also secretly sweet individuals, and Dustin clearly has a soft spot for his girlfriend Suzie (NeverEnding Story is still playing in our heads).

Libra (September 23rd – October 22nd): Steve Harrington
When we first meet Steve, he’s the coolest guy in school and a bit of a jerk. But, he looks good while doing it and is the life of the party, which are very Libra qualities. As we get to know him in later seasons, we realize he’s actually very sweet, loyal, and resourceful. We also find out that he truly cares what other people think of him while he’s trapped in the underground bunker with Robin, making him even more of a Libra than we previously thought.

Most on-brand quote: “Hello, ladies…” Because Libras are nothing if not smooth.

Scorpio (October 23rd – November 21st): Chief Hopper
Just like a Scorpio, Hopper carries an air of mystery around him. Even when he says what he’s feeling, we can’t help but think there’s a bit more going on beneath the surface. He clearly has very deep emotions, as demonstrated by his feelings for Joyce and his paternal love for Eleven. And he also seems to be very good at his job, completing tasks that would end anyone else who tried a lot sooner. This makes Hopper a true Scorpio.

Most on-brand quote: “Maybe I’ll just kill Mike. I’m the chief of police, I could cover it up.” Because yes, Scorpios are this intense.


Sagittarius (November 22nd – December 21st): Robin
Season three introduces us to Robin, a quirky, loveable character that the franchise tricks us into believing will be Steve’s new love interest. Instead, we got a totally free, totally cool, and totally gay icon. And we’re not complaining. Robin always has a good attitude, even while she’s locked up with Steve. At one point, Steve thinks she’s crying. Nope, our optimistic Sagittarius wouldn’t be caught dead in tears, unless they were from laughter.

Most on-brand quote: “I can’t believe I’m gonna die in a secret Russian base with Steve ‘The Hair’ Harrington.” Said while laughing, because a Sagittarius will always make a joke—even if it’s the last thing they do.

Capricorn: (December 22nd – January 19th): Erica Sinclair
Another character who received a more prominent role this season was Lucas’ little sister, Erica Sinclair. Erica is arguably one of the best characters of the season, with her quick wits and sassy attitude. She’s incredibly smart, bold, and blunt, making her a Capricorn. She’s all about getting things done, and she knows she’s the best person for the job in true Capricorn fashion. Even her negotiation skills are superb (free ice cream…for life).

Aquarius: (January 20th – February 18th): Jonathan Byers
Jonathan Byers always looks like he’s running on three hours of sleep and eight cups of coffee. He has brooding eyes, is extremely thoughtful, and never shies away from a conspiracy theory, making him the team’s Aquarius. Aquarians are also known to walk to the beat of their own drum, and Jonathan doesn’t care what his peers think of him.

Most on-brand quote: “You shouldn’t like things because people tell you you’re supposed to.” Because an Aquarius makes their own rules.

Pisces (February 19th – March 20th): Will Byers
Sweet, innocent, wide-eyed Will Byers is most definitely a Pisces, and we’d think that even if his birthday wasn’t in the script (March 22). In all of season three, we watch Will act like a Pisces (“I’m fine. I said I’m fine!”) as his friends develop relationships and lose interest in the things they once did together. He lets his emotions build inside of him until it leads to an outburst at Mike, then easily puts aside his anger in order to come to the gang’s aid. Oh, Pisces.

Most on-brand quote: “It’s like when you have a dream and you can’t remember it unless you think really hard.” Because if anyone’s going to be talking about (and affected by) their dreams, it’s Pisces.