5 Habits We Think Are Healthy (But Really Aren't) 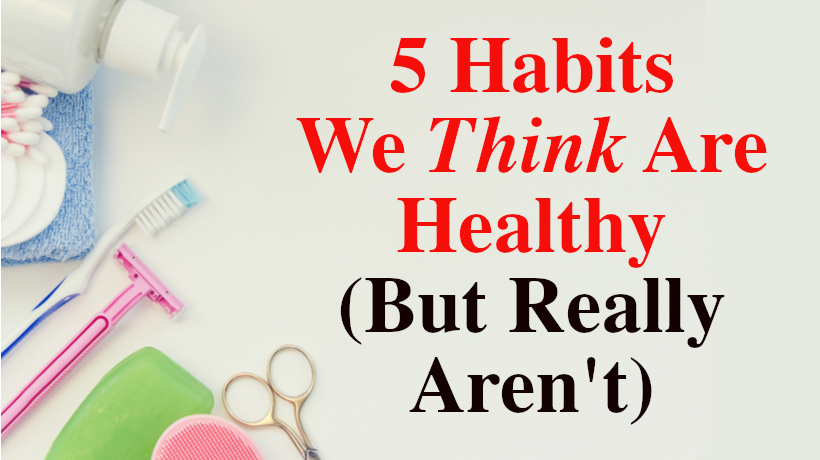 Sometimes “common knowledge” is actually made up of common lies! When rumors turn into myths that everyone takes for fact, it can be hard to know what’s true. But science can help you distinguish reality from health-harming fantasy. Make sure to avoid these five common habits:

That hot morning showering may feel great, but it may not be great for your health. “Normal, healthy skin maintains a layer of oil and a balance of good bacteria and other microorganisms. Washing and scrubbing removes these, especially if the water is hot” according to Robert H. Shmerling, MD, Senior Faculty Editor at Harvard Health Publishing. Washing your hair can strip it of essential oils and leave it prone to more damage in the long run. Try using sulfate-free shampoos and conditioners.

Dr. Jen Gunter, OBGYN, says that contrary to popular beliefs douching is extremely damaging to the vagina. “Douches are damaging because the chemicals (yes, even vinegar) damages lactobacilli, an essential bacteria for vaginal health.” Gunter says to think of the lactobacilli like the coating for a self-cleaning oven. According to gynecologist Dr. Alyssa Dweck, manually “cleaning” your vagina can cause itching, irritation, and even infection. Dr. Kelly Culwell, an OB-GYN says that most gynecologists recommend washing only externally with water, or a mild, unscented soap at most.

The American Academy of Otolaryngology discourages putting any objects in your ears. If you think you have health issues related to earwax, contact your doctor. Seth R. Schwartz, MD, MPH, “There is an inclination for people to want to clean their ears because they believe earwax is an indication of uncleanliness. This misinformation leads to unsafe ear health habits.” Putting small objects in your ear, such as Q-Tips, pushes earwax deeper inside, and can damage the eardrum and canal, potentially permanently.

American College of Preventive Medicine (ACPM), a professional society representing approximately 2,000 physicians worldwide, released a position statement opposing popular fad diets as a means for losing weight. The ACPM statement points out that a lot is already known about the range of dietary patterns that best promotes long-term health: diets rich in whole grains, vegetables, and fruit, with very limited calories from saturated and trans fats. Dr. David L. Katz says, “We have evidence as well that the very dietary pattern that promotes health, in conjunction with regular physical activity, is the best means of producing sustainable weight loss, and even preventing diabetes.” Paul Loomis, M.D., says that there tend to be common characteristics with fad diets, such as promising rapid weight loss, requiring eliminating foods, having rigid rules, and severely restricting calories.

Cooking in the microwave instead of on the stove is often a lot easier and more efficient. It may also be healthier. According to the FDA, “Microwave cooking does not reduce the nutritional value of foods any more than conventional cooking. In fact, foods cooked in a microwave oven may keep more of their vitamins and minerals, because microwave ovens can cook more quickly and without adding water.” That doesn’t mean you should opt for junky frozen meals, but you can steam your veggies in the microwave with a clean conscience.

Showering daily — is it necessary?

Why shouldn’t you douche? Because the vagina is like a self-cleaning oven

17 ‘healthy’ habits that aren’t doing you any good

Should I be using a feminine wash?

Don’t fall for a fad diet

Vaccines Do Not Cause Autism