5 Herbs & Spices That Help With Inflammation 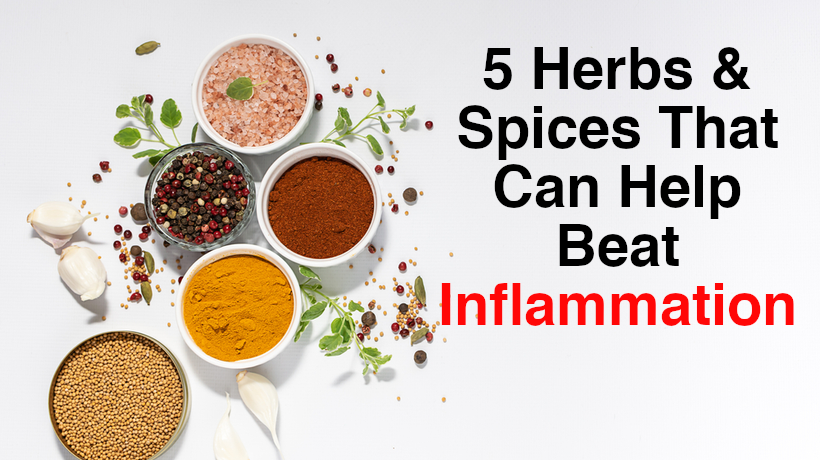 Ginger is a delicious spice with a peppery yet sweet flavor. It is incredibly versatile and easy to incorporate into many dishes, such as stir-fries, stews, and salads. Ginger contains more than 100 active compounds, such as gingerol, shogaol, zingiberene, and zingerone. These are likely responsible for its health effects, including helping reduce inflammation. It may help with osteoarthritis and it reduces joint inflammation.

Garlic is a popular spice with a strong smell and taste. It is easy to incorporate into your dishes. It has also been used in traditional medicine for thousands of years to treat arthritis, coughs, infections and more. The health benefits of garlic come from its sulfur compounds, such as allicin, diallyl disulfide and S-allulcysteine, which have anti-inflammatory properties. According to the NIH, studies have shown that garlic helps raise antioxidants in the body, which regulates inflammation.

Rosemary is a delicious, fragrant herb native to the Mediterranean. It works for seasoning and pairs nicely with several types of meat, such as beef, lamb, and chicken. Rosemary helps reduce inflammation due to its high content of polyphenols, particularly rosmarinic acid and carnosic acid. A 16-week study in 62 people with osteoarthritis found that drinking a daily tea with high rosmarinic acid helped their inflammation.

Ginseng is a plant people have used in Asia for thousands of years, treasuring it for its medicinal properties. It is easy to add to your diet by having a tea or adding it to recipes such as soups or stir-fries. Ginseng has beneficial antioxidant and anti-inflammatory properties, mainly due to its active compounds called ginsenosides. Their effects include reducing signs of inflammation in the body. According to the NIH, a study found that Korean red ginseng extract reduced inflammation and improved antioxidant activity in skin cells from people with eczema.

Cinnamon is a delicious spice and people have prized it for its health properties for thousands of years. This spice has antioxidants that have potent anti-inflammatory properties. An analysis of 12 studies over 690 participants found that taking 1,500-4,000 mg of cinnamon daily significantly reduced inflammation. Notably, while cinnamon is safe in small amounts, too much can be dangerous. It has high levels of coumarin, which has been linked to liver damage when people consume too much. The best to is season with cinnamon sparingly.