5 Signs He Does Not Want to Get Married 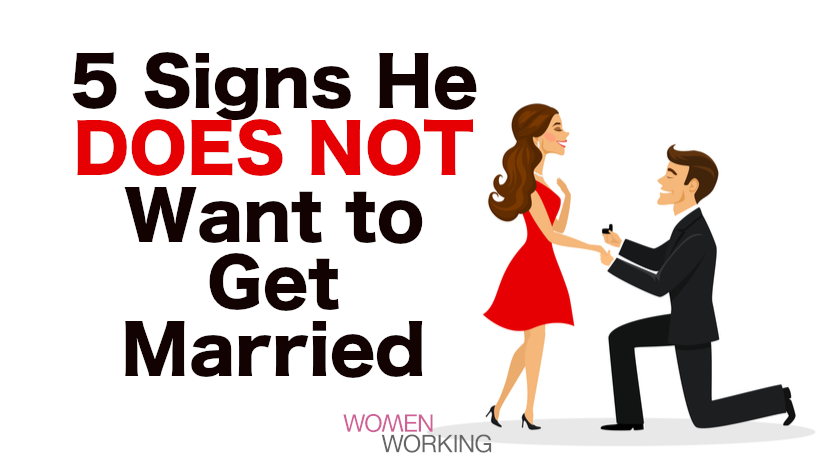 Being in love is such an intense journey and women tend to long for a happily ever after. What that means to many of us is eventually we would like to get proposed to and married. Unfortunately for some of us, the dream proposal we are hoping for might not be with who we are expecting. Recognizing the signs early on that marriage might not be in the cards allows us more time to find the right one.

Here are five signs that he does not want to get married:

You’re way past the point of dropping hints.

Perhaps you wanted a surprise proposal. You’ve certainly put in the time the relationship needs for you to feel like a ring is long overdue. Maybe you have dropped a few hints and made a few jokes, but lately, you have been reduced to what feels like “begging.” Once you’re actually having conversations or arguments openly about expecting the next step and he seems hesitant…pay attention. Does he seem annoyed, scared, or humorous about the topic? Annoyed and scared could indicate he is far from ready and your time is precious. You might want to walk away if he doesn’t want to commit. If he seems humorous or playful it could mean it’s in the future and you just have to be patient. Trust your intuition.

He says he’s happy with the way things are.

This one is very simple. If he says he’s happy with the way things are or doesn’t want to ruin something that’s already “so good,” then that’s exactly what he means. Sometimes we as women want to dissect what has been said to us and think it might mean something else. But this is a situation you’re going to have to listen to what he is saying whether you like it or not.

You’ve never heard him talk about marriage or weddings in a positive light.

You might want to be careful if the only thing you’ve heard him say about marriage is negative comments. Perhaps he comes from a broken family or you may have even heard him rant about “what is even the point” or how stupid it is. If you bring up the topic of marriage and he changes the subject as fast as possible, marriage isn’t on his mind and might possibly be something he can’t bring himself to admit he doesn’t ever want.

He’s not a planner.

If your partner only makes plans for the immediate or short-term, marriage likely isn’t a priority or even on their mind for that matter. You might want to consider that someone who doesn’t like talking about the future might not be so interested in making a lifetime commitment.

He surrounds himself with single friends.

This isn’t true for everyone, but many people tend to surround themselves with people whose lifestyles and aspirations they admire or follow behind. If a man has friends who are in committed relationships, settling down, and having kids, chances are it’s crossed his mind and he will want to follow suit. So don’t panic if he has some single friends, but pay attention to if most of them are single and not interested in commitment. It may very well mean he’s not at that stage of his life either. Like minds tend to unite.