8 Signs It's Not Love It's Emotional Hunger 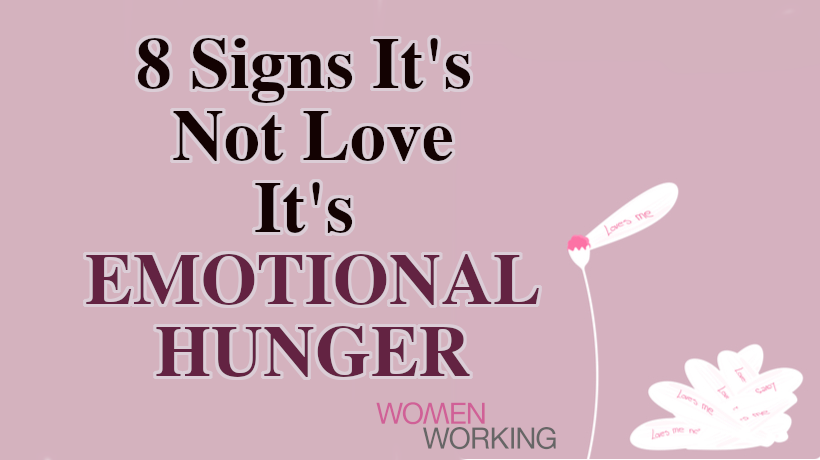 Is it love or is it emotional hunger? Often, we can get them confused. Robert W Firestone, Ph.D., defines emotional hunger as “a strong emotional need caused by deprivation in childhood.” Firestone says this is different from love in that emotional hunger is a condition in which pain and longing act as the main driving force. Those who have pain or longing inside of them “often act out in a desperate attempt to fill a void or emptiness.”

SACAC, a clinic in Singapore, puts it simply, “Love nurtures, while emotional hunger drains the others and leaves them empty.”

Below, you will find eight signs of people who crave love. Are you emotionally hungry?

When you are emotionally hungry, you tend to value the love and touch of another human being. You may not have received much physical and emotional love during childhood.

“People who crave love put huge importance on affection. They may even think nothing else matters,” Exploring Your Mind, an online magazine focused on psychology, neuroscience, personal development, among many topics, explains.

Giving too much of yourself

licensed clinical social worker Jude Treder-Wolff, CGP, CPAI says, “Over-giving to others in the hope that being available and helpful to others is a kind of emotional insurance [is an example of being emotionally hungry].”

People who give too much of themselves in a new relationship or friendship may end up draining themselves because they do not allow themselves “me time.”

Making conclusions about what people think of you

“[One habit of emotional hunger is] trying to determine what other people like or want and adapting to match it to make and sustain connection,” Treder-Wolff says.

Emotional hunger and love can look similar, especially in the beginning. An emotionally hungry individual may seem highly attentive and affectionate. While being loving and attentive is a good trait, their partners may feel like they are suffocating.

SACAC says, “a deprived person may latch onto a romantic partner or even their child. The result is an emotionally draining relationship where the victim is constantly having their emotional energy drained by the deprived person.”

If you are emotionally hungry, it can be challenging to set boundaries with others.

Clinical psychologist and licensed marriage and family therapist Dr. Lori Whatley explain, “People who are emotionally hungry don’t usually have good boundaries.” Whatley notes that for individuals with a positive self-image, respecting and setting boundaries is not a problem.

For parents who are emotionally hungry and tend to latch onto their child, the duality may confuse the child.

“Many children grow up in an environment in which they are focused on by a parent, and there are no boundaries,” says SACAC. “They feel confused because their parent appears to be ‘there for them,’ but the parent’s focus and intrusion left them insecure and untrusting.”

Engaging in casual hookups to feel a thrill

Casual sex is OK, so long as both partners are careful. However, when an emotionally hungry person seeks casual sex, they do it to pursue “nourishment.” Meaningless interactions in the bedroom may help to replace emotions that need to be addressed and fill the empty void for a short while.

“Sex can be the easiest way to trick ourselves into getting our emotional needs met,” says therapist Markie Keelan, M.A., LPCC. “We get validation that we are worthy of another person’s time mixed with endorphins and the pleasure centers of our brain to make us feel ‘good.'”

Abusing substances to fill the void

Similar to sex, abusing drugs and alcohol may be a coping mechanism for emotionally hungry people.

“Other short-term fixes that people use when they are unaware of how to get their needs met include self-destructive tendencies like isolation, […] or even drugs or alcohol,” Keelan says.

If you or a loved one suffer from substance abuse, please talk to a doctor or therapist immediately.

Denying the relationship is over.

Emotionally hungry people latch onto others to feel loved. So, when someone breaks the news, they deny the other person’s thoughts on breaking up.

“For instance, an emotionally hungry [person] might refuse to accept [their] partners’ desire to break up and [they] might behave irrationally,” says Whatley.