5 Ways to Shut Down Passive-Aggressive People 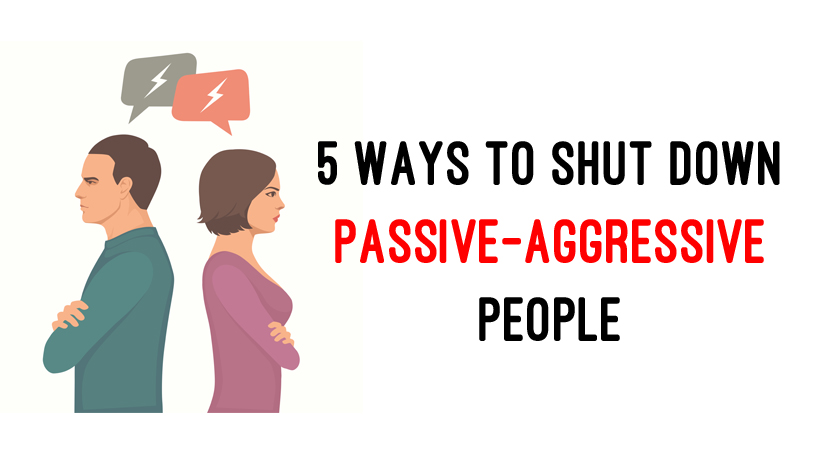 Passive-aggressive people have just as much anger or frustration as outwardly aggressive people –  the difference is that they aren’t confrontational. Instead of coming right out and saying what they’re thinking, they take subtle digs at you. Their inability to have authentic conversations is toxic to not only themselves but also to the people around them. Read below for five ways to rise above this kind of behavior.

When responding to this type of person, it’s important to refrain from sounding accusatory. Practice using “I” statements that get to the root of how you feel, rather than “you” statements, which will only serve to offend the other person and make them even more passive-aggressive.

For example, instead of saying something like, “You never help me around the house because you’re selfish,” say “I feel hurt when I have to do the majority of things around here alone.”

Don’t feed into their negativity

This might seem like an obvious one, albeit extraordinarily hard to do. Passive-aggressive people are always looking to get a rise out of you – they want to make you angry because they feel angry. Engaging in their drama will only fuel their fire and give them the satisfaction of having made you upset – so don’t give them this power over you..

Calling a passive-aggressive person out on how they’re feeling is sure to throw them off; just be sure not to snap right back at them. If you acknowledge that you understand that they’re upset and validate the reality of their emotions, they just might feel like they don’t have to be so hostile and hopefully be honest about how they’re feeling.

As frustrating and hostile as they can be, try not to jump to conclusions. You never know what a person has gone through that has made them lash out in this way. Passive-aggressive people feel like they lack confidence and control, so this is their way of trying to get some back – even though this is an ineffective method. Try to be the bigger person.

If you’ve tried all of the above methods and you still find that nothing is working, consider if you need to be hanging around this type of person anymore. If you can’t completely get away from them, try to lessen the amount of time you spend with them.