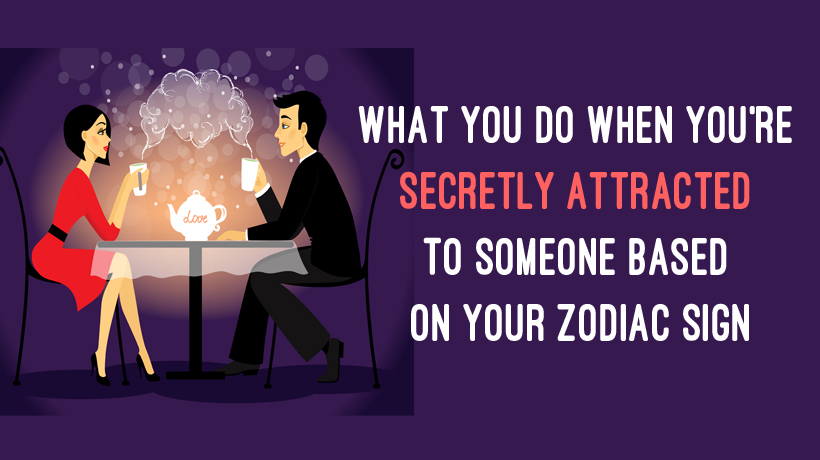 Everyone has their own telling signs that they’re interested in someone. Read below to see if we guessed yours.

Aquarius (January 20th-February 18th)
When you’re around someone you’re attracted to, you exhibit a lot of nervous energy. You’ll fidget with your jewelry, constantly fix your hair, and even struggle to find the words to express what you’re thinking – which is completely out of character.

Pisces (February 19th-March 20th)
You tend to go out of your way to let someone know you’re attracted to them. You’ll be sure to shower them with little, meaningful gifts and random acts of kindness.

Aries (March 21st-April 19th)
Aries women know what they want, and they’re not afraid to strive for it. If you’re attracted to someone, you find it hard to hide your emotions. You’ll playfully tease them – and there’s a definite twinkle in your eye when you look at them that’s sure to give you away.

Taurus (April 20th-May 20th)
If you’re into someone, it won’t be a secret for long – your eyes will betray you. You’ll constantly be looking at the object of your affection, though as soon as they look back at you, you shyly smile and look away.

Gemini (May 21st-June 20th)
Geminis always come up with unique ways of expressing themselves. When you’re interested in someone, you want to be physically close to them at all times – but you won’t act on this in an obvious way. Instead, you’ll do subtle things – like draw something silly on the back of their hand that’ll stay with them all day.

Cancer (June 21st-July 22nd)
You don’t even try to hide how you’re feeling- you wear your heart right on your sleeve. However, since this is how you act with everyone, it can be hard to tell when you’re interested in someone or whether you’re just being friendly.

Leo (July 23rd-August 22nd)
When a Leo woman is attracted to someone, she is very protective of them –  and you’re sure to stay close by their side whenever you’re with them. You also pay close attention to your appearance – constantly checking to make sure you look put together.

Virgo (August 23rd-September 22nd)
Whenever you’re interested in someone, you always like to follow up with them. You’re sure to text them first and get their attention in little ways.

Libra (September 23rd-October 22nd)
When a Libra falls for someone, they find it hard to focus on anything else. You’ll do whatever it takes to get their attention, especially by being your quirky self.

Scorpio (October 23rd-November 21st)
When you fall for someone, you let them know with your eyes and body language. You’ll give them a gentle touch in passing, which is sure to leave them wanting more.

Sagittarius (November 22nd-December 21st)
Your sign is super comfortable with being who you are, you attract other people to you through your humor. When you’re secretly attracted to someone, this side of you shines. Since you also love to laugh, you’ll always laugh at their jokes too.

Capricorn (December 22nd-January 19th)
Capricorns like to take it slow when they’re into someone. You’ll find yourself wanting to spend as much time as possible with them so you can get to know them better.