7 Root Causes Of Depression Not To Ignore 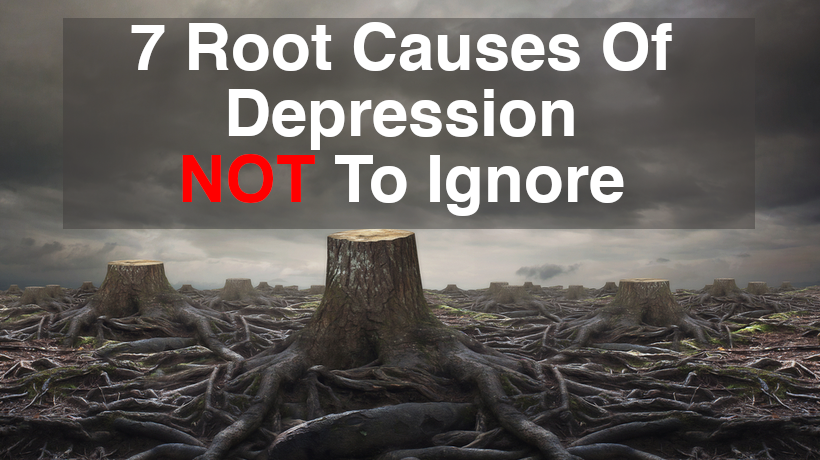 Depression is a common but serious mood disorder, according to the National Institute of Mental Health. It causes severe symptoms that affect how you feel, think, and handle daily activities. There are different reasons as to what may cause the development of depression. Here are seven root causes of depression that you should be aware of.

It Can Be Due to Medical Conditions

There can be certain medical conditions that can be significant to mood disturbances, medical illnesses, or medications that may be at the root of up to 10 to 15 percent of all depressions, according to Harvard Health. Hypothyroidism, a condition in which your body produces too little thyroid hormone, often leads to exhaustion and depression, says Harvard Health. Other conditions like heart disease can link to depression, which can lead to a slower recovery, future cardiovascular trouble, and a higher risk of death, according to Harvard Health.

It Can Be Genetics

Genetics has also become a cause for developing depression. According to Stanford Medicine, scientists have looked at patterns of illness in families to estimate their “heritability,” or roughly what percentage of their cause is due to genes. To do this, they did a study and found people with depression who have a twin, and whether the twin is also ill. They discovered that heritability is probably 40 to 50 percent and might be higher for severe depression. Stanford Medicine says that this could mean that in most cases of depression, around 50 percent of the cause is genetic, and around 50 percent is unrelated to genes, meaning psychological or physical factors.

If You Suffer Grief

Experiencing a severe amount of grief can lead to having depression. Depression symptoms can worsen after an event like the death of a loved one, says Timothy J. Legg, Ph.D. Even though depression and grief can overlap, they are treated in different ways. These intense feelings of sadness are normal when you’re grieving, but some people become depressed because of it. According to Harvard Health, up to 50 percent of widows and widowers have depression symptoms during the first few months after a spouse’s death.

It Can Be Due to Abuse

According to Harvard Health, traumas may be a cause for developing depression. A study in the Journal of the American Medical Association showed that women who were abused physically or sexually as children had more extreme stress responses than women who had not been abused. The women had higher levels of stress hormones ACTH and cortisol, and their hearts beat faster when they performed stressful tasks. Harvard Health says that researchers believe that early trauma causes subtle changes in brain function that account for symptoms of depression and anxiety.

Hormones Can Cause Depression

According to Mayo Clinic, a change in the body’s balance of hormones may be involved in causing or triggering depression. This can be hormone changes with pregnancy and during the weeks or months after delivery, which is known as postpartum depression that affects the new mother. Other causes of hormonal changes include menopause, thyroid problems, or other disorders.

Many people can be affected by the change in seasons, known as seasonal affective disorder. According to Harvard Health, this form of depression affects about 1 to 2 percent of the population, particularly women and young people. It seems to be triggered by more limited exposure to daylight, typically coming during the fall or winter months and subsides in the spring. Harvard Health says that it has similar symptoms to general depression and includes lethargy, loss of interest in once pleasurable activities, and a change in sleeping and eating patterns.

Due to Drug Use

Another cause of depression is the misuse of drugs and alcohol. According to the National Alliance on Mental Illness, 21 percent of adults with substance abuse also experience major depressive episodes. Chronic use of drugs can lead to both short- and long-term changes in the brain, which can lead to mental health issues including depression, according to the National Institute on Drug Abuse. Many people who are addicted to drugs are also diagnosed with other mental disorders and vice versa.

If you need immediate help, call 911 or your local emergency number. Also, consider calling your doctor or mental health professional. You can call a suicide hotline number, like the National Suicide Prevention Lifeline at 1-800-273-TALK (1-800-273-8255). Or reach out to a close friend or loved one.