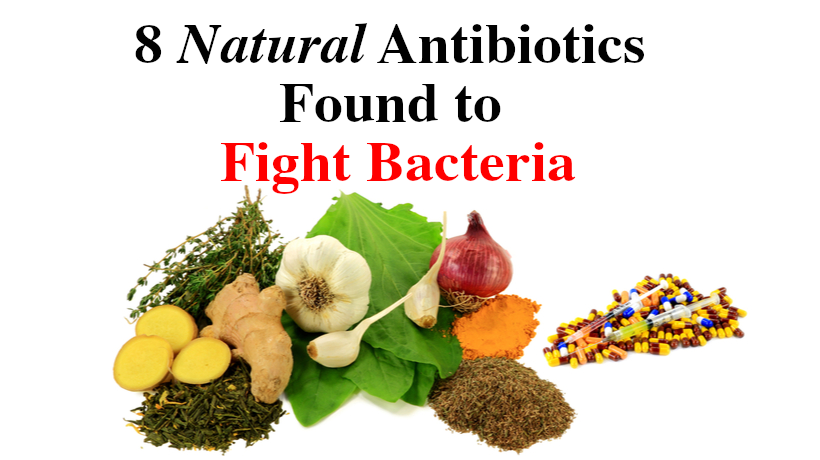 Modern medicine has come a long way since the early 19th Century. Many illnesses considered incurable then, we have pills and prescriptions for today. However, there is a downside to modern medicine. When we take pills to aid in relief and recovery (even for the common illnesses), we give the bad bacteria in our body a chance to adapt to the man-made antibiotics, forcing us to increase the dosage every time we get sick. By eating foods with natural bacteria-fighting antibiotics and letting your body get the rest that it needs, we are able to control and slow down the resistance. Below, you will find a list of eight natural antibiotics to use to fight bacteria in your body.

Saute garlic in a pan or consume garlic concentrate.

Similar to garlic, onions have flavonoids built into them that gives them that powerful bacterial fighting power. Onions are packed with vitamin C, the immune-boosting vitamin that helps to fight infections when you are sick. According to Healthline, onions “may decrease your risk of cancer and inflammatory diseases.” Also, eating onions and garlic regularly may help to prevent the development of cardiovascular disease, according to this 2010 review.

Most commonly found in soups and stews, you can saute them in a pan with garlic to get the most out of this healing vegetable.

A beautiful flower and medicine used by Native Americans for many years, the echinacea flower is most commonly used to fight strep throat and other bacterial infections. You’ll only need a small dosage of this plant to feel the full effects. The best way to use it is by boiling water and making tea out of it. Just make sure to remove the roots, stems and flowers before you drink!

Ginger is also a natural antibiotic and anti-inflammatory spice that can be found in many grocery stores. Recent studies have shown that ginger is a great antioxidant that helps to remove phlegm from the body and can help relieve a sore throat. There are many ways to use ginger, although the most common way is to combine it with honey and hot water.

According to Healthline, virgin coconut oil has “antibacterial properties to help fight infections.” Most commonly, this virgin oil can be used to help curb and relieve diarrhea. However, coconut oil is also packed with lots of fat, so be careful if you do decide to use it.

A study done by PubMedCentral on oregano oil concluded, “potentials of oregano oil as an alternative to antibiotics for the treatment of wound-associated infections regardless of antibiotic susceptibility.” Oregano oil has antiviral and anti-inflammatory compounds that can help with colds and flus. However, users of oregano oil must be careful as it can produce unwanted side effects such as nausea, vomiting, fatigue, and stomach problems among many others according to a Healthline article.

The best way to use oregano oil is to use it as an essential oil and put a few drops in a diffuser to get the best effects. You can also use oregano oil by rubbing it on your skin only after you mix it with coconut oil.

Apple Cider Vinegar (or ACV for short) has anti-bacterial, viral, parasitic, and inflammatory properties. ACV is most commonly used to treat wounds and cuts as well as gastrointestinal issues according to Urology of Virginia. Many have also used ACV to lose weight, but there is very little scientific evidence to back up this claim.

Cloves can be used to help fight oral bacteria. Eating cloves can help fight the strain for E.Coli according to one Healthline article. Using mouthwash with tea tree oil, cloves and basil has been proven to improve “gum health, as well as the amount of plaque and bacteria in the mouth