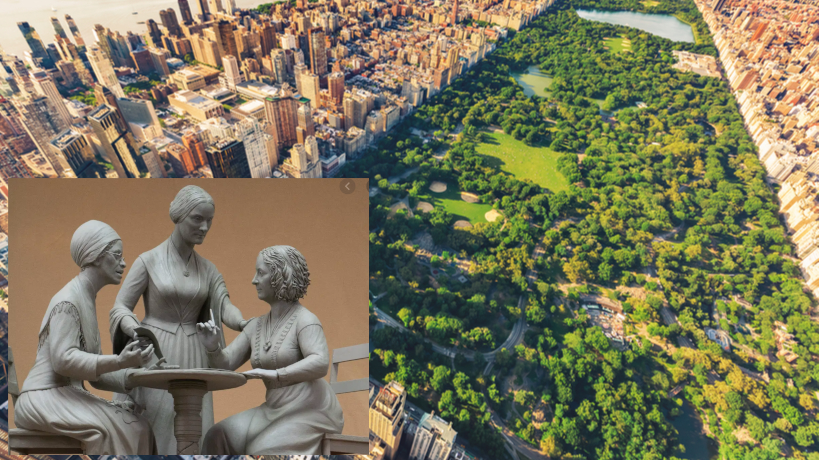 In New York’s Central Park there are 23 statues of historical figures, but not even one honors a woman. Created by nationally renowned sculptor, Meredith Bergmann, the Women’s Rights Pioneers Monument will depict suffragists Sojourner Truth, Susan B. Anthony, and Elizabeth Cady Stanton, all of whom were New Yorkers.

Elizabeth Cady Stanton was an American suffragist, social activist, abolitionist, and leading figure of the early women’s rights movement. Susan B. Anthony was a pioneer crusader for the women’s suffrage movement in the United States and was president of the National Woman Suffrage Association. Her work helped pave the way for the Nineteenth Amendment (1920) to the Constitution, giving women the right to vote. Sojourner Truth was an American abolitionist and women’s rights activist. Truth was born into slavery but escaped with her infant daughter to freedom in 1826. After going to court to recover her son in 1828, she became the first black woman to win such a case against a white man.

According to ABC, Bergmann was chosen from 91 submissions for her vision of the three women sitting at a table. Open to the viewer to interpret, either writing a speech or working on legislation.  Monumental Women, an all-volunteer led non-profit made up of women’s rights advocates, historians, and community leaders, funded the project.

“While honoring their specific efforts on behalf of women’s suffrage, women’s civil rights and the abolition of slavery, Bergmann hopes her latest work will also make a statement about the need to recognize the contributions of women.”

Bergmann has stated that she has included hidden details within the sculpture and it has a lot of meaning. “I want the piece to be in-depth, so as you pass it day after day or visit it once a year, there is more to discover,” said Bergmann.

Monumental Women is hoping to increase awareness and appreciation of women’s history through a nationwide education campaign. ABC reports that Monumental Women’s next project is the creation of a New York City Women’s Rights Trail throughout all five boroughs.

The statue is being unveiled August 26, 2020, and can be live-streamed here.