9 Habits of Miserable People (and How to Avoid Having Them) 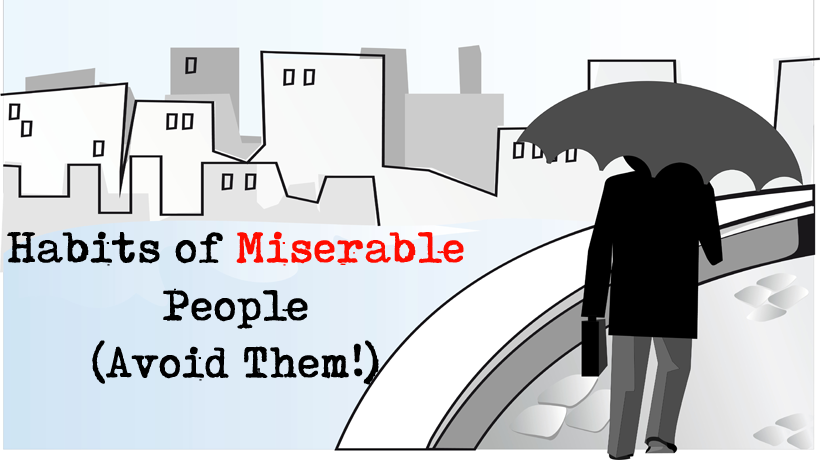 Some folks are just miserable. And unfortunately, nothing you do or say can snap them out of it. Even though your heart is in the right place, you can’t be responsible for pulling them out of their bad mood. Here are habits of people who may be stuck in Miseryville.

They don’t take risks
It’s true that for most people there is a greater fear of loss than there is a hope for gain. This may seem negative but it’s actually quite natural. Only a small percentage of people are risk-takers; most people might research and seize an opportunity when they see one. Miserable people will just walk away, not wishing to disturb the calm waters of their lives.

Financial fears
The last several decades have not been good for personal finances. Salaries are frozen, opportunities may be available but small, and more people are standing at the line between middle class and working poor. When society accepts that reality, miserable people dwell on it–creating a living nightmare of possible future job loss or financial downfall.

They are stuck in the past
Because of risk aversion, they tend not to focus on making new memories and instead are quite content replaying the old ones over and over again. Respect the past, but always make new memories.

Intellectual boredom
The desire to stay normal often goes hand in hand with intellectual boredom. Why challenge the boundaries of your knowledge (educators call this the “zone of proximal development”) when it is so much easier to keep saying and thinking the same things?

Negative feedback loop
“Cast your bread upon the waters, for you will find it after many days,” reads Ecclesiastes 11. Miserable people put their misery into the world, only to have it return to them. If you’re miserable but you have a job, are you always bringing your co-workers down with your negative views? Do you then wonder why they seem to avoid you?

Selfishness
Miserable people spend a lot of time in their own head. They often act like they are outraged at this or that aspect of life, but they are actually just miserable in their own lives. If they were to turn their vision outwards—towards doing good for others and addressing their needs— what a transformation that would be.

Blaming others
Bless you Emperor Marcus Aurelius and Zeno of Citium, the fathers of Stoicism, a practical philosophy whose main truth is to “choose not to be harmed and you won’t feel harmed. Don’t feel harmed, and you haven’t been.” No more blaming other’s habits for your misery.

Victimhood
Not only do the miserable blame others for their misery, they then take on the mindset of a victim (“woe is me”). Nothing makes you feel more helpless than allowing yourself not to help yourself.

They are contrary
There is nothing nice you can say where a miserable person won’t find the rusty lining. “Lovely day, eh Bob?” “Sure, if you like climate change.” Have you ever heard of the Saturday Night Live character, “Debbie Downer”?

Everyone needs a little compassion. What you can do to help someone in your life who is miserable (yes, even yourself) is to take a close look at their life to see if they are doing any of these nine things and find a way to change their mindset.