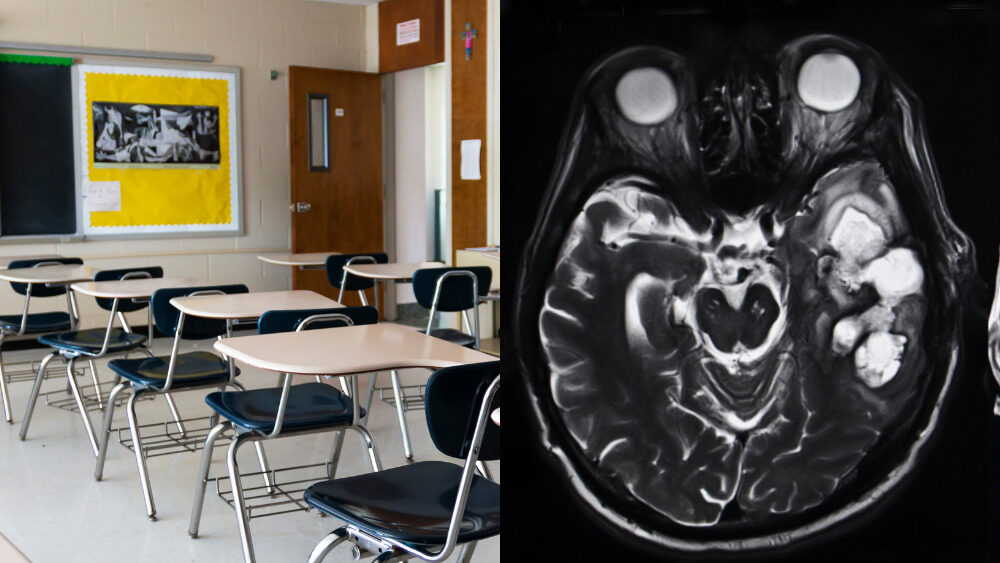 Featured images via Shutterstock and do not show Colonia High School or scans from any of its alumni. Photos for illustrative purposes only.

In the late 90s, Al Lupiano, then 27 years old, was diagnosed with a rare brain tumor. Last year, Lupiano’s sister received the same diagnosis —  then two hours later, his wife. The common thread between the three, and 93 other brain tumor patients from Woodbridge, New Jersey? They are all graduates of Colonia High School.

Desperate for answers, Lupiano is sharing his and his family’s story, and trying to connect the dots that might explain the unusual local cluster of brain tumor diagnoses in alumni of his alma mater.

Soon, Lupiano was on the case. He created a Facebook group to see if any other graduates of Colonia High School, which was built in 1967, had developed tumors or related conditions. Then, the research began.

“The three became five, the five became seven, the seven became 15,” Lupiano said of the responses. In total, he gathered names of 94 former students and staff members who have developed brain tumors.

He reached out to the school to share his findings, and local officials have joined in on the search for answers.

Dr. Joseph Massimino, superintendent of Woodbridge Township School District, said officials are awaiting details on next steps from environmental agencies, while Woodbridge Mayor John McCormac has contacted the state Department of Health, Department of Environmental Protection and the Federal Agency for Toxic Substance and Disease Registry, the Mayor’s Office of Communications for the Township of Woodbridge confirmed to PEOPLE on Friday.

“We have requested that the agencies move quickly to conduct any necessary research and verification of data so we can efficiently coordinate and facilitate any actions that will assist in the evaluation of the information and implementation of any environmental impact studies,” McCormac and Massimino said in a statement.

The statement also stated that a radiological and environmental remediation company began testing and collecting data from the school on April 9th.

“Please know that the health and safety of our school community, and the Colonia community at-large, is paramount and we take the information shared very seriously,” the town’s statement continued. “We will maintain contact with any/all agencies now involved in reviewing the data and investigating the issues of concern in order to keep our public informed of any findings.”

“I will not rest until I have answers. I will uncover the truth,” Lupiano told NJ.com last week.