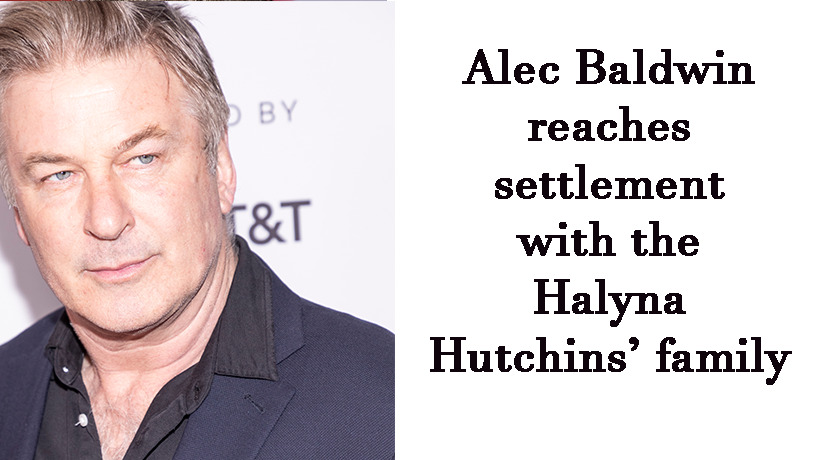 Alec Baldwin and the family of Halyna Hutchins have settled the wrongful death lawsuit against the actor.

The lawsuit was filed after Hutchins, a cinematographer, was fatally shot by Baldwin on the set of the movie Rust.

According to an article on People.com, Baldwin is “pleased” to have settled the lawsuit, and production for the movie will resume in January.

“We are pleased to announce today the settlement of the civil case filed on behalf of the family of cinematographer Halyna Hutchins,” Baldwin wrote on Instagram. “Throughout this difficult process, everyone has maintained the specific desire to do what is best for Halyna’s son.”

A feature on Usatoday.com revealed Hutchins’s husband, Matthew Hutchins, will work as an executive producer of the movie as part of the settlement. He and Halyna’s 9-year-old son Andros were plaintiffs in the lawsuit.

“We have reached a settlement, subject to court approval, for our wrongful death case against the producers of ‘Rust’ including Alec Baldwin and Rust Movie Productions,” Matthew Hutchins said in a statement provided by his attorney Brian Panish of Panish Shea Boyle Ravipudi LLP, according to Usatoday.com. “I have no interest in engaging in recriminations or attribution of blame (to the producers or Mr. Baldwin). All of us believe Halyna’s death was a terrible accident. I am grateful that the producers and the entertainment community have come together to pay tribute to Halyna’s final work.”

Per an article on Yahoo.com, Joel Souza, Director of Rust, said of Matthew Hutchins taking on the role as executive producer, “In my own attempts to heal, any decision to return to finish directing the film could only make sense for me if it was done with the involvement of Matt and the Hutchins family. Though certainly bittersweet, I am pleased that together, we will now complete what Halyna and I started. My every effort on this film will be devoted to honoring Halyna’s legacy and making her proud. It is a privilege to see this through on her behalf.”

Although the wrongful death lawsuit has been settled, the final investigation report from the Santa Fe Sheriff’s Office is still pending

The Yahoo.com article reported that a spokesperson for the District Attorney’s office said, “The proposed settlement announced today in Matthew Hutchins’ wrongful death case against Rust movie producers, including Alec Baldwin, in the death of Halyna Hutchins will have no impact on District Attorney Mary Carmack-Altwies’ ongoing investigation or her ultimate decision whether to file criminal charges in the case. While civil suits are settled privately and often involve financial awards, criminal cases deal only in facts. If the facts and evidence warrant criminal charges under New Mexico law then charges will be brought. No one is above the law.”

Baldwin said in December 2022, he and his legal team believe he will not be charged.

“I have been told by people who are in the know, in terms of even inside the state, that it’s highly unlikely that I would be charged with anything criminally,” he said.