Brain Cancer: A Nightmare that turned into Reality for Mark Ruffalo 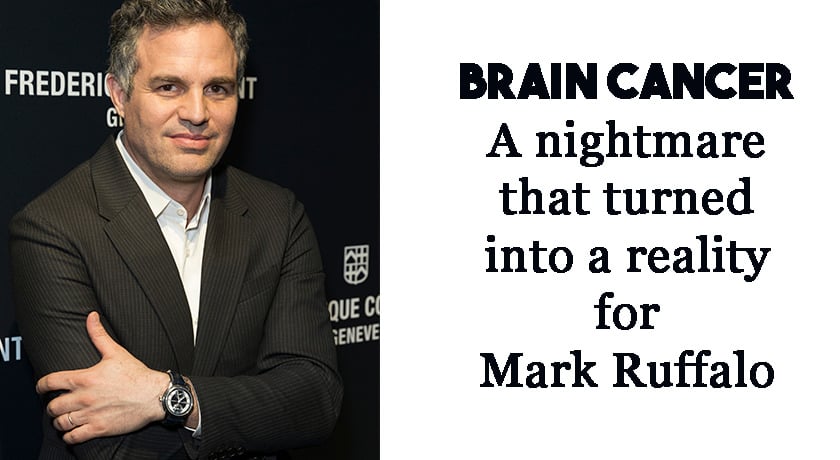 Actor Mark Ruffalo, 54, is known to many for his role in “the Hulk.” He’s starred in romantic-coms like 13 Going on 30 and Rumor Has It, as well as action movies like the Avengers franchise and Now You See Me.

However, his rise to fame has not gone without challenges. Ruffalo was diagnosed with a brain tumor. According to Yahoo and Best Life, he was on set for the movie You Can Count on Me in 2000 when he had a dream he had a brain tumor.

“I had become friendly with the set doctor on that movie who was on the board of the local hospital,” he told the Acoustic Neuroma Association in 2013.

“I went to her that morning, and I said, ‘listen, I had a really scary dream last night, and you’re probably going to think I’m crazy, but I think I have a brain tumor and I’d really like to get it checked out.’ And she said, ‘you are crazy, but you shouldn’t have to live with that fear, so I’ll order you an MRI—or CAT scan—tomorrow,'” he continued.

The results showed a tumor behind his left ear that was “the size of a golf ball.”

According to Men’s Journal, Ruffalo was advised to have surgery to remove the mass right away, but there was a chance the left side of his face would become paralyzed.

At the time, his wife, Sunrise Coigney, was pregnant with their first child named Keen. Ruffalo kept the tumor diagnosis from his wife for fear of adding to the stresses of pregnancy,

He told Sunrise a week after Keen was born and underwent surgery two weeks later.

Fortunately, the tumor was benign, and the paralysis on the left side of his face he experienced after the operation resolved itself a few months later. However, he did permanently lose hearing in his left ear, Yahoo reported.

Per NY Mag, Ruffalo had to withdraw from the movie Signs, directed by M. Night Shyamalan, due to the tumor. Although this was a setback, he went on to have a successful career in Hollywood.

He starred in Shutter Island alongside Leonardo DiCaprio in 2010 and, Now You See Me alongside Morgan Freeman in 2013.

He starred in Avengers: Endgame in 2019, which grossed $2.8 million. It is the highest-grossing film in the Marvel Cinematic Universe, according to The Richest.

Although the tumor was a terrifying experience, Ruffalo said it made him realize how much he loved acting, as per Yahoo.

“I see it as kind of a gift in a weird way,” he said. “Your priorities become very clear. My relationship to acting became very clear. At that point I thought maybe I wasn’t enjoying it the way I thought I would, and so having that kind of taken away from me for a little while made me understand how much I actually loved it and cared about it,” he added.

“I didn’t die, but I learned a lot about myself… I learned that I could survive,” he concluded.