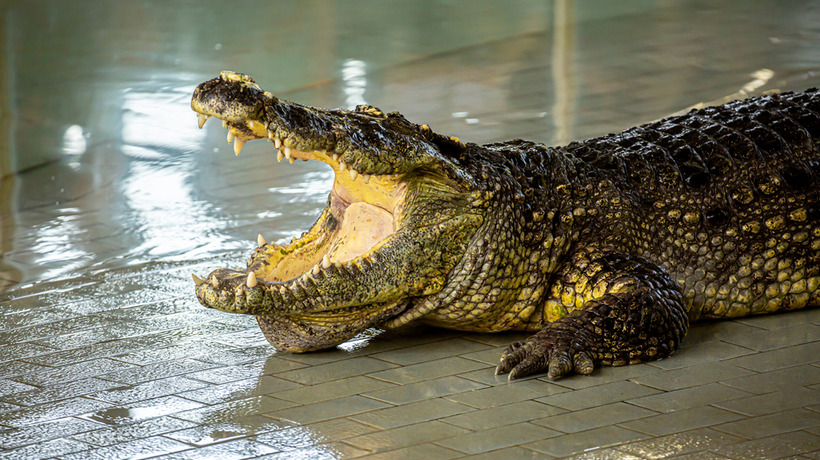 At Salt Lake City’s Scales and Tails’ alligator exhibit, trainer Lindsay Bull had just opened the door to the alligator enclosure to feed the reptile when its jaws suddenly “really bit down” on her hand, trying to slowly drag her into the small pool in the enclosure.

Bull pushed Darth Gator back, “something I’ve done lots of times before,” she told local news. However, this time, the reptile clamped down onto her hand and refused to let go.

That’s when Wiseman, who was standing nearby, asked Bull if there was any way he could help.

“If you can get on his back, go on his back,” she responded. Without hesitation, Wiseman quickly ran through the open door of the enclosure to jump on the gator’s back. Later on, the trainer later told local news that she only allowed Wiseman to enter because he said he had previously worked with an 18-foot python.

Wiseman told local reporters that he was scared, but Bull calmed him down and asked him to talk to her while they patiently waited for the animal to release her hand from its grip. After about a minute, Bull managed to free her hand and another bystander, identified as Todd Christopher, pulled her out of the enclosure.

Under Bull’s careful instruction, Wiseman was also able to safely exit the exhibit.

“I hope no one thinks it’s a good idea to just run out and hop on a gator because they saw it, but they probably saved her arm and possibly her life by running in and stabilizing him so he couldn’t keep rolling on her, and then they just held him still until he relaxed and let her go,” Scales and Tails owner Shane Richins said.

“We never expect someone to jump in like that, but we’re super grateful they did,” he added. “Had this guy not jumped in, she may have lost part of her arm, not survived the situation.”

Yesterday, Bull posted an update to Facebook on the situation and her condition:

“I got lucky to land in a hospital that employs what has to be the best orthopedic surgeon in Utah. He was able to improvise and come up with a solution that should result in full use of my hand. I can’t explain the level of admiration I have for that man.”

“I’m being treated aggressively with antibiotics, which I’m thankful the Infectious Disease staff here were prepared to do. Lastly, I’ve had the most wonderful nursing staff that have made me feel safe and comfortable since I got here.”

“I definitely want to thank everyone that has reached out and for doing so, as well; it’s made recovery feel so much more manageable! Thank you!”

Bull told local news, “What happened was an accident. I’m so much more to blame than Darth Gator,” adding that the animal is not a “mindless killing machine.”