Which Chinese Zodiac Sign Are You (and What Does That Mean for 2018)? 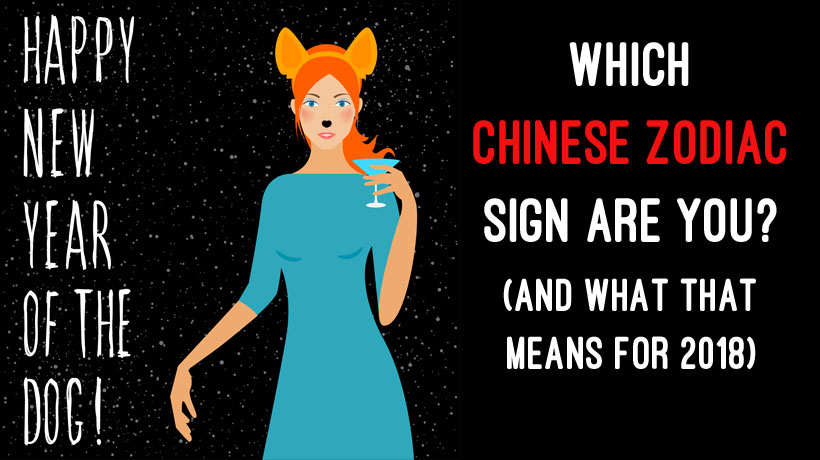 Those born under the sign of the rat will need to start getting comfortable with the uncomfortable next year. You typically enjoy keeping to yourself or those of your own kind. Under the influence of the dog, you’ll learn to come out of your shell and relate to others in a more meaningful way.

Luckily for you, your hardworking and persistent nature is one that the dog can respect. Your shared traits make it apparent that you will greatly benefit from the year of its reign. Be sure to also open your heart to self-acceptance – trusting in your decisions isn’t always easy for you to do – you’ll absorb more of this confidence from the dog’s energy.

Get ready for 2018 – because it’s sure to be a year of abundance for you. You’ll finally be rewarded for all of your hard work and be able to visibly see the fruits of your labor.

While this year didn’t bring you great karma, that will undeniably change in 2018. Just as a rabbit may outwit and outrun the dog, you’ll be able to maneuver your way around the difficult obstacles that arise in the new year with much success.

While you’re generally used to receiving plenty of accolades and attention, the dog isn’t so used to the spotlight. As a result, you may feel discouraged when you feel like your efforts are going unnoticed. With that being said, 2018 will be a year that will humble you deeply.

The snake couldn’t be more at odds with the earth dog – you find comfort in doing things on your own and solely looking out for number one, while the dog prefers collaboration and community. As a result, you’ll clash with the dog’s year in more ways than one. Allow your pride to be pushed to the side and invite new personalities into your life.

Your similar personality traits and values with the earth dog will allow you to thrive in the new year – both personally and professionally. You, however, may yearn for more exciting opportunities than the ones you’re presented with. Your interests are not as subdued as that of the dog’s.

2018 will be a year of changes for you, but your instincts are everything. Practice patience, even when people try to convince you that your ways aren’t right. It’s time to take new risks that you were previously unsure about.

As a monkey sign, you’re known for taking things a bit too lightly sometimes. This year will urge you to stay grounded and be wary of your actions. You may end up dealing with consequences you weren’t ready to face.

Similar to the dragon, you may feel a bit disrespected in the new year when you realize that people aren’t giving you the attention that you’re used to getting. Manage your expectations and those of others – modesty and humility are key in 2018.

Contrary to what you may think, your own year isn’t necessarily going to bring you the most luck – in fact, it’ll be the opposite. Your weaknesses may get the best of you – so it’s important that you approach 2018 with extreme self-awareness.

Your tendency to always take care of others may crash in the new year – you’ll have a lot on your plate, and there’s no time to be bashful about asking for help. Reach out to the people you trust; don’t compromise your own needs for the sake of others’ comfort.