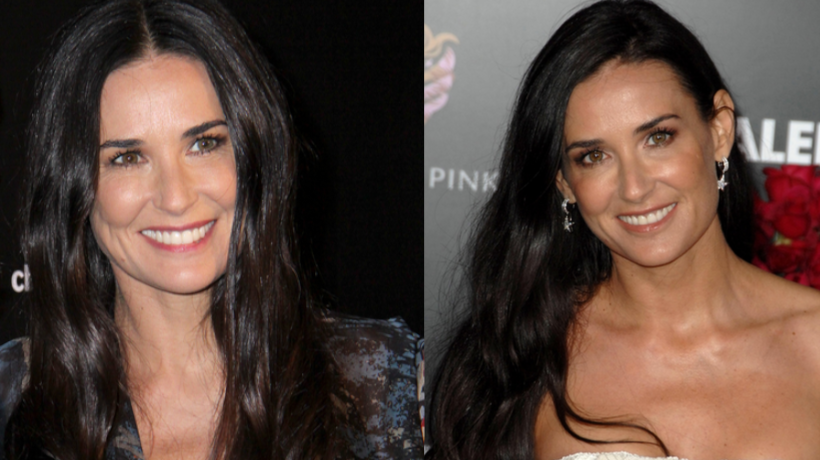 Demi Moore was born on Nov. 11, 1962, in Roswell, New Mexico, as Demetria Guynes. Her parents had divorced before she was born. As a result, her mother and stepfather, Virginia and Danny Guynes, raised her.

Both her mother and her stepfather drank heavily, but her mother was the one who tried to commit suicide many times, according to Daily Mail.

When Moore was only a teenager, her mother and Dan Guynes split. Due to this split, Moore moved with her mother many times before settling in Hollywood.

Moore explained in Interview magazine that “By moving around a lot, I learned to assimilate into whatever new surroundings I had and to become very comfortable with people quickly. I think that was one of the strongest contributing factors to my becoming an actor.”

She moved out of the house by age 16 and worked as a debt collector and tried her hand at modeling and acting. She eventually got a role on General Hospital and her career took off from there.

She married and divorced many men, including Emilio Estévez, Bruce Willis, and Ashton Kutcher.

In 1991, she gained traction for posing nude on Vanity Fair when she was in her second pregnancy. She decided to use the fame and backlash to talk about women and pregnancy.

“People in this country don’t want to embrace motherhood and sensuality. … You’re either sexy, or you’re a mother. I didn’t want to have to choose,” she told Interview magazine.

In 1998, she went to stay with her mother in her final moments. Unfortunately, a few days before her mother’s passing, Moore had to deal with the announcement of her and Bruce Willis’split.

She faded from the limelight after a while to take care of her children. She made her comeback in 2003 as a villain in Charlie’s Angels.

During that same year, she started dating Ashton Kutcher, who was 15 years younger than her. In her recent memoir, Inside Out, she revealed that Kutcher pressured her into threesomes, and she had agreed to do them because she wanted to seem “fun” to her younger husband. She profoundly regrets agreeing.

In 2012, she collapsed and was brought to the hospital after taking “’a hit of nitrous oxide’ then smoked synthetic pot called Diablo.”

In an interview with Diane Sawyer, she said, “I guess the fundamental question that came forward for me was, ‘How did I get here?’…If I were to look back, I would say I blinded myself, and I lost — I lost myself.”

After her relapse, she decided to seek help for her constant exhaustion and overall health.

Just one year later, she finalized her divorce from Ashton Kutcher.

She said, at the time, “As a woman, a mother and a wife, there are certain values and vows that I hold sacred, and it is in this spirit that I have chosen to move forward with my life.”

Since her split with Kutcher, she has played a few roles from Rough Night (2017) and Love Sonia (2018). She has completed filming on the movie Songbird and is currently filming a movie titled Please Baby Please.

In September 2019, she drew media attention for her new memoir Inside Out, where she details her childhood and openly talks about her ongoing substance abuse journey.