Early Signs of Dementia Women May Not Know About 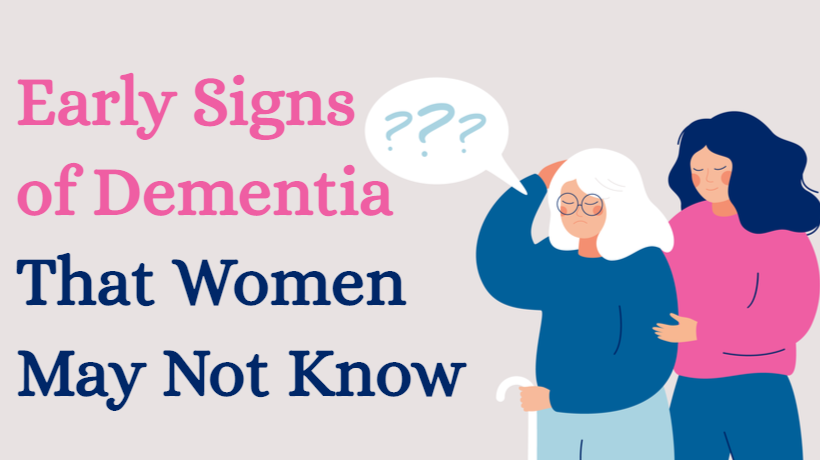 We typically do not fret about dementia until our later years, but it is a disease everyone should be concerned about at any age in order to get a proper diagnosis and treatment. An estimated 6 million Americans deal with dementia, with women being the majority of diagnoses.

According to Elise Caccappolo, Ph.D., an associate professor of neuropsychology at Columbia University Irving Medical Center, “Starting in our 30s, the brain starts to shrink very, very slowly—it’s not even perceptible to most people.”

Caccappolo also adds that “For someone to be diagnosed with dementia, they have to have a significant decline in more than one cognitive area, and those changes have to affect their daily living.” This would be classified as difficulty dealing with spatial/visual awareness, consistent memory problems, and even language problems.

Dementia does not necessarily have one definition, and it is not the same for everyone. Some may exhibit more visual problems than memory problems, making the disease very complex in how it is diagnosed. However, there are a few universal warning signs of dementia that can be detected early that you may not be aware of. If you feel you or a loved one is experiencing any of these, consult with your doctor or professional to ensure a proper diagnosis.

This may not be a commonly known sign of dementia, but it can be an indicator of it in the early stages. Becoming more prone to irritation and frustration signals a lack of control of emotions. This, however, can be the opposite for some people who may have dementia. According to Caccappolo, “people who have difficult personalities or are very intense can sometimes become much more docile, almost sweeter.”

A new study published in Alzheimer’s & Dementia: The Journal of the Alzheimer’s Association supports the possibility that hearing impairment can be a very early sign if an individual will have dementia later on in life. “Many people with dementia will experience difficulty following speech in a noisy environment—a symptom sometimes called the ‘cocktail party problem.” Participants in the study were asked to identify numbers that were spoken over a white noise background sound. They would be subsequently categorized into normal, insufficient, or poor speech-in noise hearing. The study followed up with the participants for eleven years, discovering 1,285 subjects of the  82,039 men and women aged 60 and older were diagnosed with dementia. Data indicated that individuals with limited speech-in-noise hearing had a 61 percent higher chance of getting dementia than those with average hearing abilities, while those with poor hearing had a stunning 91 percent increase.

Another study published in the journal of Alzheimer’s Research & Therapy sought to identify a correlation between driving habits and early “preclinical Alzheimer’s”. The participants who had been diagnosed with Alzheimer’s later in life observed two distinguishing driving habits: driving slower and making more abrupt changes while driving.

Every now and then, we may get so caught up in our lives that the days seem to pass on by, and we find ourselves asking “what day is it?”. While this normally wouldn’t be a concerning question, doctors warn that confusing the days too often can be an early sign of dementia. Jason Karlawish, MD, a professor of medicine, medical ethics and health policy, and neurology at the University of Pennsylvania Perelman School of Medicine, wrote for AARP. “[But a] cause for concern is forgetting the day of the week (asking on a Friday, ‘Is today Monday or Tuesday?’).”

We may forget an appointment or a task that needs to be completed once and a while, but if this once-in-a-blue-moon becomes a frequent occurrence, it may be time to see a doctor. Forgetting the time of day or how much time has passed, according to Sevil Yasar, MD, PhD, a geriatrician and associate professor of medicine at Johns Hopkins University, is a major predictor of dementia’s development.

Sensory decline and loss of smell can be another strong indicator of dementia. In one 2017 study published in the Journal of the American Geriatrics Society where 2,906 were studied (both men and women) subjects were instructed to sniff “a device similar to a felt-tip pen” to identify a variety of scents. The study team performed a follow-up interview five years later. They discovered that people who couldn’t identify at least four of the five smells were more than twice as likely to acquire dementia throughout that time period.

While many things can contribute to the development of dementia, including lifestyle habits, geographic location, and genetics, looking for these early warning signs can be the key to receiving proper and helpful treatment.