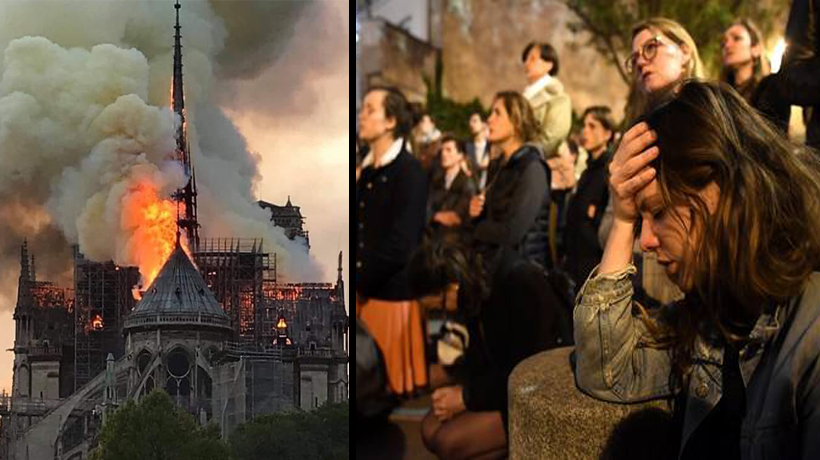 Fire engulfed the iconic Notre Dame cathedral in Paris, France on Monday, April 15, destroying the iconic spire and rooftop from the back of the medieval church. Around the world, people shared emotional reactions while the fire burned for more than 12 hours.

The cathedral was going through renovations when the immense fire occurred, according to reporting from CBS News. As of now, authorities haven’t announced the cause of the fire. In a video shared by CBS, two-thirds of the roof of the cathedral collapsed and the tallest spire crumbled from fire damage.

All over social media, people are tagging #NotreDameCathedralFire to express their feelings.

Former US President Barack Obama tweeted, “Notre Dame is one of the world’s great treasures, and we’re thinking of the people of France in your time of grief. It’s in our nature to mourn when we see history lost – but it’s also in our nature to rebuild for tomorrow, as strong as we can.”

As the fire burned, crowds gathered as close to the cathedral as firefighters would allow. Some prayed, some cried, and others sang hymns. Videos of crowds singing “Ave Maria” in unison appeared on YouTube and various news sites.

In a report by NBC News, Jossien Prouteau, 22, said he felt powerless when he watched the flames engulf the cathedral.

As a practicing Catholic, Prouteau said he would spend a few minutes a day thinking or praying outside the cathedral. “I’m in mourning,” he added. “It is not only a beautiful work of art aesthetically, but there is a spiritual connection.”

While almost 400 firefighters were battling the fire, nearby, people formed human chains to rescue the works of art so they wouldn’t be lost in the fire.

Since the fire was contained away from the front façade, fire service spokesman Gabriel Plus told reporters, “All the works of art that were in the ‘treasures’ area of the cathedral have been saved.” Initially, firefighters expressed concern that the famous bells would overheat and collapse, but firefighters were able to keep the fire away from the twin medieval bell towers. There were no deaths and one injury.