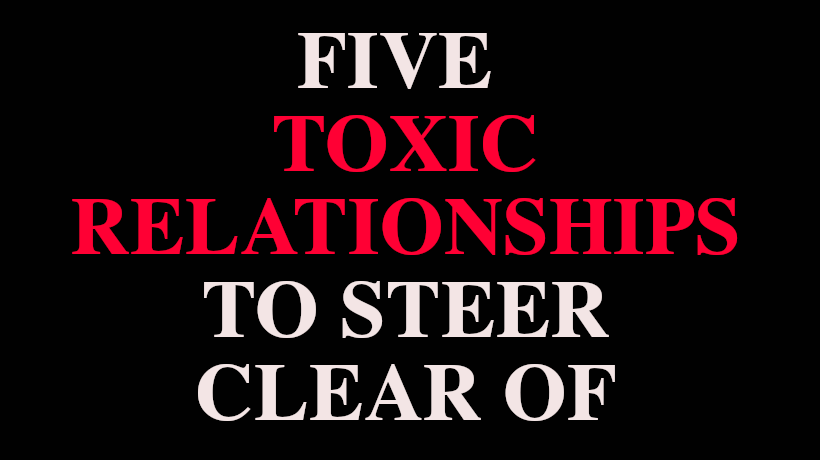 Nothing drains your energy more than a toxic relationship. Whether it’s romantic or even with a co-worker, it can put you into a dark place surrounded by negativity. According to Dr. Travis Bradberry, we cannot control the toxicity of others. but by recognizing a toxic relationship forming in its early stages you may be able to control the power it might have on you.

Here are five toxic relationships you may want to steer clear of:

A relationship that is passive-aggressive.

If you feel that a colleague, friend or partner is making sarcastic comments towards you that question you and your character, walk away. You might think you can tolerate it at first, but these feelings of anger can build. Sometimes you may even begin to doubt yourself and become more insecure. Good relationships, on the other hand, offer constructive criticism.

If the start of a relationship is built on lies, the line between fact and fiction becomes blurry. It can be hard to keep up with the stories and embellishments that have been told. Lies often pile up and become a burden. Strong relationships are built on trust.

Relationships that are one-sided.

As humans, we often make mistakes. What is important is how you react to those mistakes. If it is an isolated incident some level of understanding should be given to the offender. Certain mistakes are harder to forgive especially in romantic relationships (cheating, etc.) as opposed to in work relationships and friendships. Harping on past mistakes will only cause toxicity in a relationship. If you can’t forgive it might be best to move on.

If you feel belittled by a boss or a friend on a regular basis, you are most likely already in a toxic environment. A solid relationship requires respect on both ends for things to run smoothly. It is important that we have respect for ourselves and that we hold others to the same standard.

Disclaimer: This article is in part the opinion of the author.