How to Handle Subtle Put-Downs 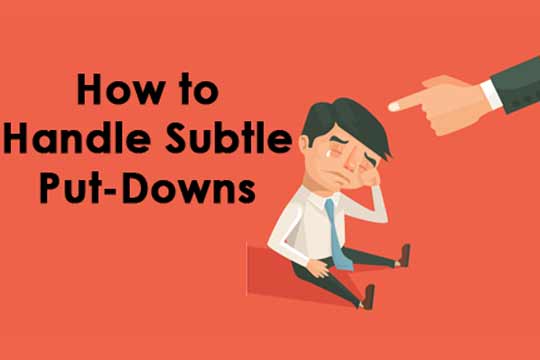 How do you react to subtle but demeaning behavior at work? It could be someone rolling their eyes at you, checking their texts when you’re talking to them, or a senior manager taking more questions from the men in the group and discounting the women. Instead of tolerating such behavior, do this:

Deal with it immediately. Resist the temptation to “wait and see if it happens again.” If you’re in a group setting when this behavior happens, talk to the person privately the first time. Give them the benefit of the doubt, but be very clear you won’t tolerate their behavior a second time.

The next time, confront the behavior when it’s happening in the group. Be prepared for the person to accuse you of being the problem–don’t get distracted. Focus on the unacceptable behavior.

Document the behavior. Keep a record of what happened (who witnessed it, how many times it’s occurred and how you dealt with it). If you need to, you will be able to make your case to your boss or HR.

Practice the two strikes rule. The first time you address the unacceptable behavior, tell the offender that in baseball three strikes means you’re out–but they only get two strikes with you. Either the behavior will stop after you confront them the second time, or you will report it to your boss and HR.