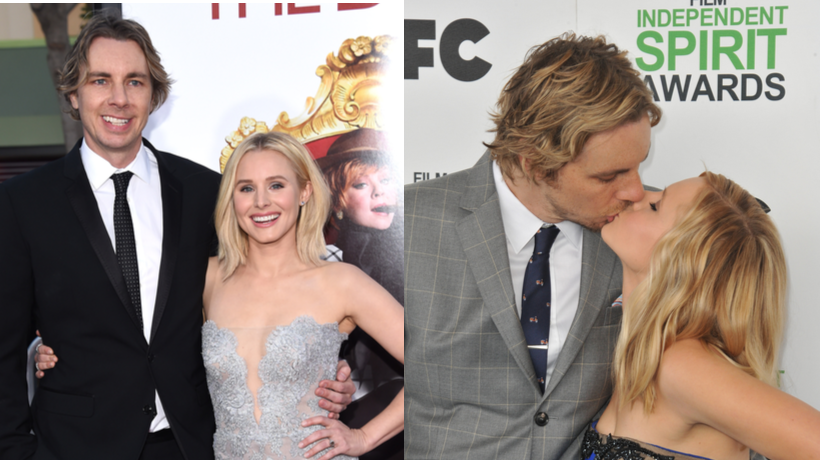 Sparks did not fly at first but after bonding over a shared love of Detroit hockey, celebrity couple Kristen Bell and Dax Shepard now stand the test of time in the public eye. Their journey together has led them to a family and being an adorable and occasionally oversharing couple to us all.

Bell and Shepard first met in 2007 at a mutual friend’s birthday dinner and they’d both recently got out of long-term relationships. Bell said on NBC’s Sunday Today, “We were sitting at a table. The only thing I remember is that he talked so much. I was like, This guy can ta-alk!’ And then I didn’t know who he was…maybe one of the guys from Jackass or something.”

Bell explained that two weeks later they both met at a Detroit Red hockey game and started flirting. Shepard got Bell’s number from a mutual friend and texted her apologizing for violating her privacy, but Bell was impressed with his boldness. They decided to accept fate and started dating.

For his part, Shepard also has his own first impression of Bell and her friends, “When I met her and her friends, I was suspicious of their unbridled happiness. I thought, ‘Something stinks here; they’re in a cult.’ But slowly I began to see her positive way of looking at the world. She gives people the benefit of the doubt,” he told Good Housekeeping.

In an interview with Harry Connick Jr., Bell revealed that when the couple met, their relationship was somewhat toxic. “When we first met, we fell madly in love and I love the dramatic exit. There is nothing I crave more,” she said. “We’d get in a fight because we’d fight a lot, and I’d yell something and then slam the bedroom door, then I’d slam the front door, then I’d get in my car and then I’d skid out the driveway and I would sit around the corner in my car and it felt so good and I realized how incredibly toxic it was only after he pointed it out.”

Three months into their relationship Shepard gave Bell an ultimatum, that she couldn’t leave anymore during fights because he had too much respect for himself to tolerate her behavior, and instead they worked on her fighting methods.

In 2017, Bell told PopSugar that she and Shepard actually broke up briefly in 2007 before getting serious. “He sat me down and said, ‘I can’t have this right now. I think you’re wonderful, but I am still dating other people.’ And then I like, liquified and fell to the ground, but I felt incredibly respected that he had the balls to tell me we weren’t in the same place,” she said.

She continued to say that Shepard quickly realized he made a mistake and came back a few days later.

In 2009, Shepard and Bell starred in the romantic comedy “When in Rome.” After filming the move on location in Italy, the couple got engaged. He credited co-star Jason Bateman for his engagement to Bell. Shepard recalled to People that Jason was the first to push him to marry Bell.

The couple became parents to their first daughter, Lincoln Bell Shepard in March 2013.

Though the couple were already officially engaged, Bell and Shepard were waiting for same-sex marriage to be legal in California before they’d get married. When the Defense of Marriage Act and California’s Proposition 8 were overturned in June 2013, Bell proposed to Shepard on Twitter.

In December 2014, the couple had their second child, Delta Bell Shepard. In an interview with Babble, Bell gave advice on raising two children and handling temper tantrums.

The couple continues to support each other throughout their careers and continue supporting each other, like celebrating Shepard’s sobriety. In February 2019, Shepard and Bell launched Hello Bello, a collection of plant-based baby products like diapers and sunscreen.

Further proving that they are like all of us, Bell and Shepard admitted that quarantining together during the coronavirus pandemic was driving them both crazy!