If He's Having an Affair, Research Says This is Who He's Likely Cheating With 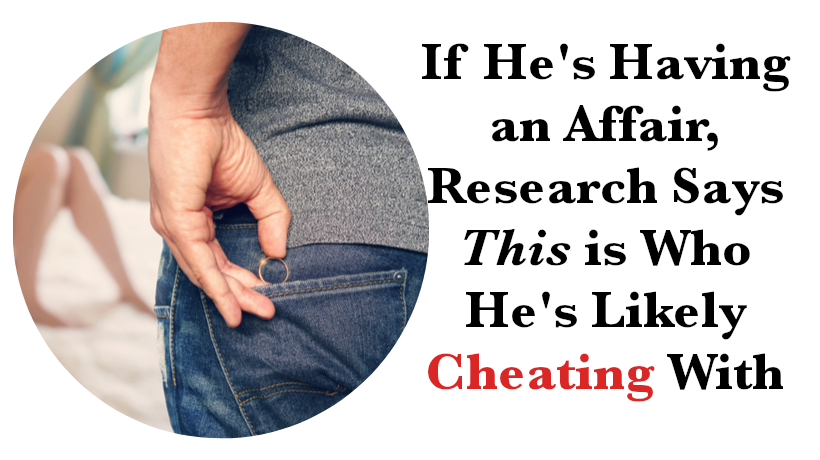 Most women tend to know when a man is having an affair. They get a sinking feeling that the relationship seems to be dying down, or something just doesn’t feel right anymore. It can be easy to find out who a man chooses to cheat with because the person who they chose is usually predictable. Here are the people that he’s most likely to cheat on you with based on statistics.

Women can rely on their intuition of who it may be.

According to Ronald E. Riggio, Ph.D., research on nonverbal communication skills has clearly shown that women are, as a group, better at reading facial expressions of emotions than men. As a result, women are more likely to pick up on the subtle emotional messages being sent by others. This is called a women’s intuition and if you feel a sinking feeling about a person around your husband, that’s probably the most likely mistress.

Affairs can start in the workplace.

A place where affairs can occur is in the workplace. According to psychologist Dr. Shirley Glass, 60 percent of the couples she treated affair’s start at work, and around 36 percent of all affairs have a coworker as a mistress or other man. Moreover, in a survey conducted by On24, 35 percent of people admitted they were much more likely to cheat when they are on a business trip.

A relationship with an ex can lead to an affair.

Exes can be major problem-starters, due to what type of relationship they have with your partner. According to data collected by The Normal Bar, around 21 percent of men and 32 percent of women had affairs with an ex and acted on their sexual tension. It could be possible to remain friends with an ex without having intimate feelings still involved, so use your instinct to tell if a secret relationship is forming.

It may seem like something that is uncommon, but it is a big possibility, one of the most likely affairs partners have are with a total stranger. According to David P. Schmitt, Ph.D., research done by Hald and Hogh-Olesen in 2010, showed that 59 percent of single men and 0 percent of single women agree to a stranger’s proposition of sex. This can make it more likely for men to be inclined to sleep with a stranger to meet their physical needs.

Affairs can happen with a brother-in-law or sister-in-law.

Affairs can happen within the family, most commonly a brother-in-law or sister-in-law. This may be due to the “proximity effect”, the more you are around a person, the more likable and attractive they become to you. According to Debra Macleod, a marriage expert, and author, proximity is key because they are already close and familiar with each other.

According to Caela Cohen, M.S.Ed., online affairs become an option for connection that offers a false sense of hope, that you can find someone better than your current partner or find what is missing between two. Using the internet and social media to make connections with others is easy because they can keep it more secretive. Covering up can just consist of changing passwords, deleting history, and erasing messages.

Some men will pay to have an affair.

Some married men will cheat on their spouses with a prostitute. According to a study, published in March 2013 in the International Journal of Offender Therapy and Comparative Criminology (IJO), 14 percent of American men have solicited prostitutes in their life, with only one percent of these men soliciting prostitutes in 2010.

Affairs can occur between close friends.

Men and women can be platonic friends, even after a relationship. However, if you notice someone who becomes too comfortable with your partner, this could be a sign that they may end up having an affair. Americans who admit to having an affair most likely cheat with a close friend, according to research from the University of Colorado Boulder’s Department of Psychology and Neuroscience.

Marriages that begin because of an affair don’t last long.

Most marriages that start because of an affair do not last long, due to mistrust in how the relationship first began. According to Frank Pittman, a noted psychiatrist, and author, almost all affairs falter and fail to produce lasting and healthy relationships.