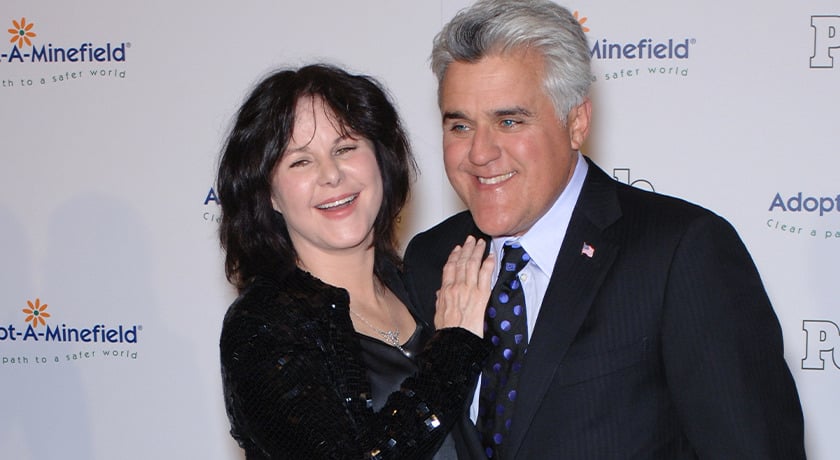 UPDATE 01/30/2023: Jay Leno is back at the Comedy & Magic Club, less than two weeks after a serious motorcycle accident broke his collarbone, ribs, and kneecaps.

There, he spoke about the accident, saying, “So, I turned down a side street and cut through a parking lot, and unbeknownst to me, some guy had a wire strung across the parking lot but with no flag hanging from it. So, you know, I didn’t see it until it was too late. It just clothesline me and, boom, knocked me off the bike.”

Leno took two weekends off at the comedy club, where he would perform almost every Sunday.

Jay Leno first met his wife Mavis in the 70’s, while he was performing at the Comedy Store, an iconic comedy club.

The comedian and TV personality remembers that he “wasn’t very good at dating” and Mavis had no plans for a serious relationship, but the two recently celebrated 42 years together in early November.

“I always had this idea that I would never get married,” Mavis told People in 1987. “But with Jay, I began to realize that this was the first time I was ever with someone where I had a perfect, calm sense of having arrived at my destination.”

The two were married on November 3rd, 1980. The couple’s success is in part because they “don’t screw around,” joked Jay. But in all seriousness, Jay shared, “I always tell guys when they meet a woman, ‘Marry your conscience. Marry someone who’s the person you wish you could be and it works out okay.’ ”

Mavis didn’t even have an engagement ring when they were first married, according to an interview in 2014 with the LA Times.”He was going to get me one, but we had just bought a house, so why would I do that? I’m not that kind of person.” She then showed the interviewer a large diamond ring, which Jay bought her “10 years ago.”

From his success, Leno is well-known for his expensive car collection, and currently hosts a show called “Jay Leno’s Garage.” Recently, Jay suffered burn injuries. He was working underneath one of his vehicles when the fire began, but it’s not clear which vehicle it was, says NBC.

Jay’s “deep second degree burns” to his face, hands, and chest were so severe that they required surgery, reports the New York Times. After the fire, Jay originally said that he would only need “a week or two” to recover, but the medical director ​​at Grossman Burn Centers in West Hills, California stated that while he expected Leno to make a full recovery, it might take longer for the comedian to heal than he expected, due to the severity of his injuries.

“He’s Jay Leno,” said Dr. Grossman. “He’s walking around and cracking jokes. He’s incredibly kind to our nursing staff, he’s very compliant and very appreciative of everyone here and really an ideal patient and one who understands the seriousness of his injury.”

“[She is] obviously very concerned,” Dr. Peter Grossman continued, says People, when questioned about Mavis during a press conference following the accident. “They have a very close relationship, and she’s doing as well as you can expect a wife who is concerned about her husband.”