Are You Too Quick to Judge Based On Your Zodiac Sign? 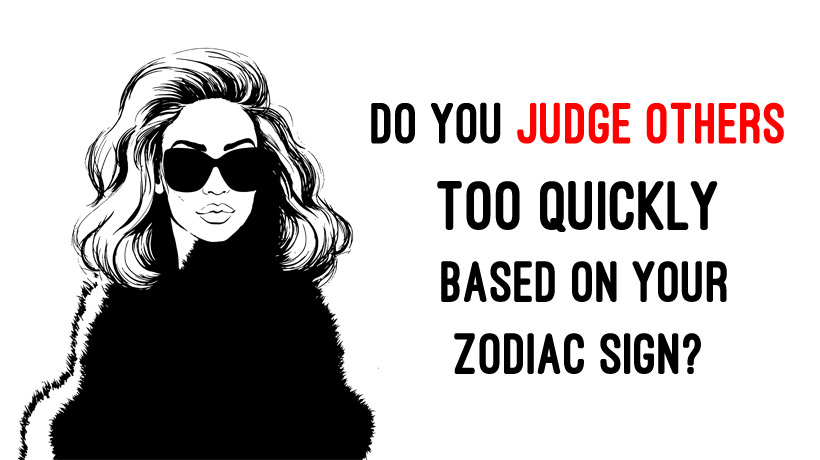 It’s hard not to judge others, and those they never do are usually just afraid to tell the truth. It’s OK to be critical, but if you pass judgement on others without reason then it might be time to exercise some patience. Find out what your zodiac sign says about just how judgmental you really are.

Aquarius (January 20th-February 18th):
While you’re not prone to being judgmental, your tendency to open up with your loved ones can make you appear as so. People may mistake your fear of getting hurt for indifference and so it’s important to stop believing that people are guilty until proven innocent.

As a Pisces, your trustworthy personality prevents you from passing quick judgments on others. Whether your overly trusting nature is a good thing is another story, but you should give yourself a pat on the back for allowing your compassionate side to shine through when meeting new people.

Aries (March 21st-April 19th):
Always eager and ready to make new friends, you don’t have time to push unnecessary judgments onto others. Your one true qualm is with those who can’t keep up with your active lifestyle, but as long as you surround yourself with exciting people there isn’t room for negative thoughts.

Taurus (April 20th-May 20th):
Your family-oriented nature may cause you to prematurely judge those who you detect want to hurt or steal away your loved ones. Because you surround yourself with people you know well, others may decide against entering your world under the impression that newcomers are not welcome.

Gemini (May 21st-June 20th):
Your social life is extremely active and fulfilling, and one reason for this is your lack of judgement. While you may not be able to divide your time properly amongst your friends and family, your curiosity and ability to adjust ensure that you’re not fond of preconceptions.

Cancer (June 21st-July 22nd):
Although you are compassionate to your close friends and family, your fear of criticism can make you  force judgements upon strangers as a defense mechanism. You believe that it’s easier to push others away than to open up, and despite your intentions, those who desire to get close to you will get hurt.

Leo (July 23rd-August 22nd):
Whether or not you set out to criticize others, the high view that you have of yourself often  ensures that others will not measure up. Even though you cherish the friends that you have, you put yourself on a pedestal in a way that minimizes those who want to get to know you.

Virgo (August 23rd-September 22nd):
Your shyness can often manifest itself into acting overly critical, both towards the self and others. While this way of approaching social situations is meant to shield you against unwanted attention, your fear of being judged forces you to judge others too quickly.

Libra (September 23rd-October 22nd):
Your way of judgement is complicated because although you have a very fair way of approaching life, this just attitude may cause you to weed out those who have different values. It’s good to stick to your guns, but if you walk the line of self-righteousness then you may come off as a bit judgmental.

Scorpio (October 23rd-November 21st):
You may keep your friends close, but you definitely do not keep your enemies closer. You’re very clear about what’s yours and anyone who tries to hone in on your friendships triggers your distrust. We know you’re just being cautious, but you have a tendency to jump to conclusions about others very quickly.

Sagittarius (November 22nd-December 21st):
Your outgoing personality draws people in under the impression that you accept everyone. But because you lack a filter, you sometimes make your unwarranted judgements known. If critiques do bubble to the surface, you have to keep them down until it’s appropriate.

Capricorn (December 22nd-January 19th):
While you will do anything for your close friends, you aren’t quick to accept those who aren’t already in your social circle; you often expect the worst in others. It’s good that you know what you want out of people, but we all know what happens when you assume.