Late-Night Hosts Address U.S. Capitol Riots: "How Is This Happening" 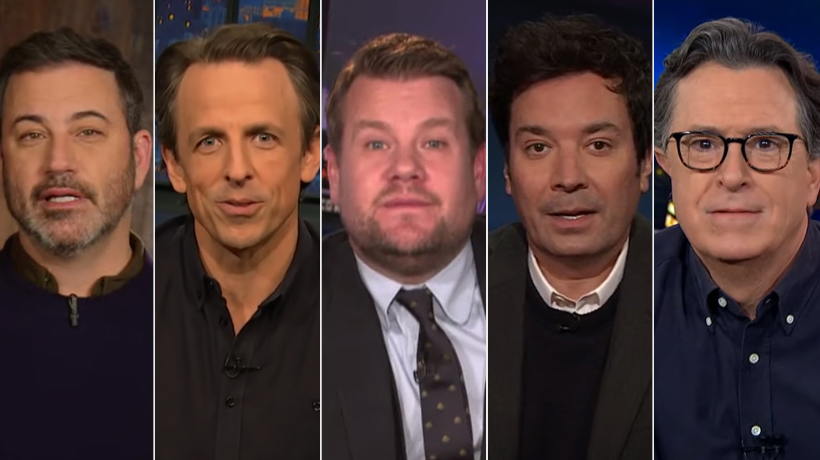 After violent riots and chaos at the U.S. Capitol, several late-night television hosts began their shows Wednesday by reflecting on such a dark day in history and expressing their sadness and frustration.

“This was one of those days that I always assumed was behind us,” Kimmel, 53, shared as he began his show, Jimmy Kimmel Live! “This was not the sort of thing I ever imagined would happen in this country, in my lifetime.”

“The president of the United States — because he is too angry, too insecure and too incompetent to deal with the fact that he lost an election, a fair election, an election that was no different than any other election, an election he lost by seven million votes and 70 electors — turns an angry mob against members of Congress and his own vice president. Not to mention endangering the Capitol police, those blue lives he claims matter so much to him,” he continued.

“It was a terrible day in the history of this country. Our president and the scumbags who kept this stolen election charade going … either intentionally or wildly irresponsibly lit these fires to start a war just to distract us from the fact that Donald Trump lost the election.”

“These people are not Americans. There is no ‘We the people,’ there is ‘Me the people’ and that’s it,” Kimmel continued, referring to Trump and other Republican senators. “The wildest part is these MAGA marchers think Donald Trump cares about them. He doesn’t care about you … He cares about himself. And only about himself.”

Fallon said, “In times like these, I think to myself, ‘How is this happening? How can this be happening?’ But I’m also thinking, ‘How can I help?’ And being here tonight and talking to you at home and reassuring you that we are going to be okay and that this is not what our country is about, is how I can help,” Fallon continued.

The host went on to condemn the day’s events, calling them acts of “terrorism” and not “patriotism.”

“Today was a disgrace. Today was disappointing. But, sadly, today was not a surprise,” he said. “But it’s important to remember that this is not who we are. I assure you there are more good people than there are bad, and good will prevail.”

“A day that will go down as a dark one in the long history of America,” he said, going on to recap what had occurred.

“Then, under the pretense of trying to calm the situation, their hero — the president — released a message this afternoon to tell those supporters that ‘You’re special and we love you.’ I wouldn’t even want to imagine his treatment or response to those people if they had been wearing Black Lives Matter hats instead of red MAGA ones,” Corden said.

As a U.K. native, Corden expressed that he used to “look to America as this beacon of light and possibility.”

“And yet today, people across the world would have looked at these pictures from Washington and they would have wondered what on earth has happened to this great country,” he said before offering a glimmer of hope.

“But I truly believe — and make no mistake — that they know that the America that they admire still exists. They know that the America that so many aspire to will be back. It’s just been hijacked by a lunatic and his crazy army for the last four years. But that’s about to end,” he continued. “In two weeks, on those same steps where that mob fought and pushed past police, Joe Biden will be sworn in as the president of the United States.”

Colbert opened A Late Show, saying he’d “rarely been as upset” as he was on Wednesday.

He then went on to call out the Republican senators who have continued to support Trump, asking if they have finally “had enough.”

“After five years of coddling this president’s fascist rhetoric, guess whose followers want to burn down the Reichstag. Because today, the U.S. Capitol was overrun for the first time since 1814, and a woman died … It is the most shocking, most tragic, least-surprising thing I’ve ever seen,” he said.

“[I have] a question for the Republican senators who helped foment this insurrection: Why did you run away? I mean, these are your peeps. They love you,” he asked. “You can run all you want for the rest of your lives but you can never escape the responsibility of what you brought upon American democracy today.”

The host also stated that the attack was “never some sort of peaceful protest.”

“This was Charlottesville come home to roost on Capitol Hill,” he said.

“What we saw today was a violent insurgency, an attempt to overthrow the legitimately elected government of the United States and it was incited, directed, and encouraged by the present, Donald Trump and more than a few members of the Republican Party and right-wing media,” Meyers, 47, told viewers.

“As we were all watching these stunning scenes of violence and sedition, of insurrection against our democracy, anxiously hoping for a restoration of calm and order, the president of the United States told the traitors and the mob, ‘We love you, you’re very special. I know how you feel.’ And he does. He knows how they feel because he’s spent four years telling them in great and odious detail how they should feel,” he continued. “So we can be shocked but we can’t be surprised. The president wanted this. He directed it, supported it, he incited it, and encouraged it.”