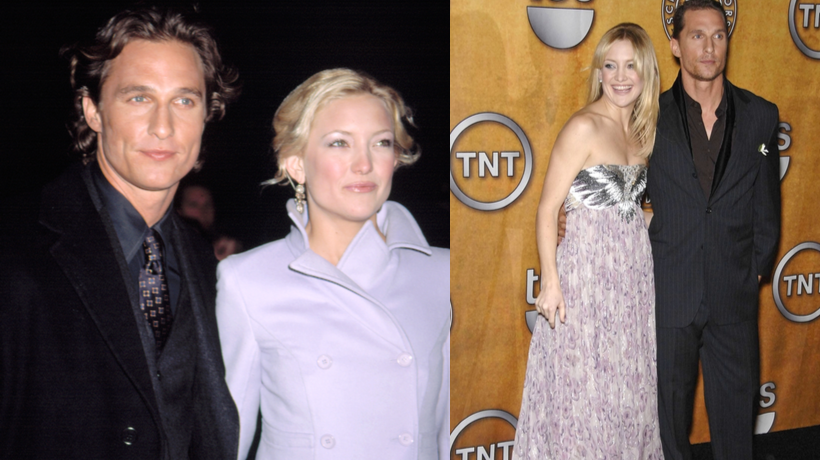 Kate Hudson’s onscreen kisses with Matthew McConaughey have been less than ideal. In an interview with Entertainment Tonight, Hudson got real about the not-so-perfect kisses with the actor. Hudson and McConaughey co-starred in How to Lose a Guy in 10 Days in 2003 and Fool’s Gold in 2008.

Hudson states, “With McConaughey, we always end up in these really extreme situations where the kissing is never [in] a good environment. We’re [kissing] after a plane crash and, like, in the water,” she said, referencing a scene in Fool’s Gold. “I have yet to have the kiss with Matthew that’s just, like, kind of simple.”

While addressing the scene on Gwyneth Paltrow’s goop podcast, Hudson recalled McConaughey having “snot all over his face” during their smooch.

Not very Hollywood romantic is it? McConaughey had a bit of a rebuttal to defend himself!

He is blaming the very not-sexy circumstances on the beach setting of the movie.

“It’s like, ‘OK, here’s the scene: You’ve just jumped from the helicopter. You’re in the middle of the ocean. You go under the water, so on action, go into the water and then come up out of the water like you’re gasping for air,” McConaughey said to Yahoo!, imitating the director giving them instructions. “You’re glad to be alive! Then you look at each other and you swim to each other and [go] into an embrace.”

“Well, there’s a lot of saltwater and snot and all kinds of stuff that are in between those, and so you’re doing that and you’re like, OK, I think that worked but did that look any good?” McConaughey said. “[They’re] like, no, we better do another take. So there were always, like, elements that made it harder… We never got to have our nice romantic kiss, yeah.”