Meteorite plummets from space and lands on Canadian woman's bed: "I've never been so scared in my life" 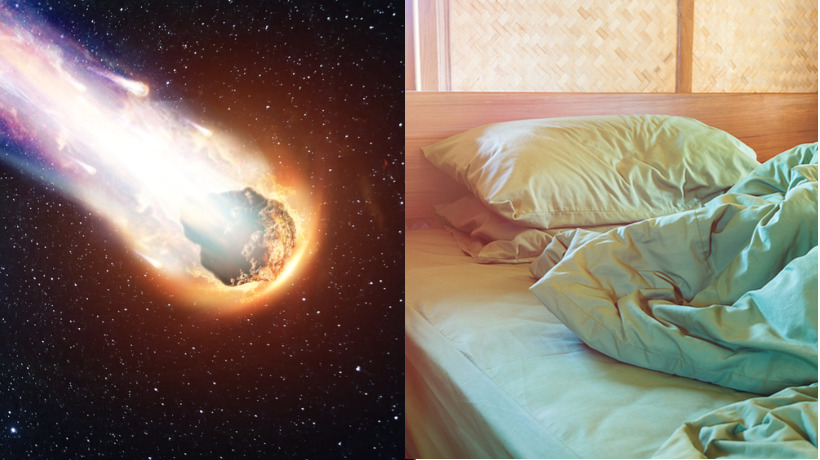 It was nearly midnight on Oct. 3, a calm evening in British Columbia. Ruth Hamilton, 66, was sound asleep in bed when she was abruptly awakened by her dog barking, followed by an “explosion.” When she turned on the lights in her bedroom, she discovered a gaping hole in her ceiling, “debris all over [her] face” and a large gray rock lying next to her floral pillows.

She later learned that the strange-looking rock was from outer space—a meteorite.

“I jumped out of bed and turned on the lights. I didn’t know what else to do, so I called 911,” Hamilton said, remembering the event. “Talking to the operator, she was asking me all kinds of questions, and at that point, I rolled back one of the two pillows I’d been sleeping on and in between them was the meteorite.”

“I’ve never been so scared in my life,” she told Canadian reporters.

“I was shaking like a leaf,” she continued. “You’re sound asleep, safe, you think, in your bed, and you can get taken out by a meteorite, apparently.”

At first, police thought the rock came from a nearby construction site, but it didn’t take long for them to realize that this theory wasn’t the case. When she and an officer asked construction workers if they had done any blasting that night, they told her that they hadn’t, but that they had witnessed “a meteorite, or a falling star, explode.”

“Then we knew that it was a meteorite that had crashed through my roof,” Hamilton said.

The crash landing went viral on social media, and also gave scientists a unique opportunity to study the meteorite, and to learn more about the solar system and the asteroid belt.

Alan Hildebrand, an associate professor at the University of Calgary who studies meteorites, told The New York Times that he and his fellow researchers were so excited to get their hands on the rock that “I think we hugged.”

Although meteorites have landed in people’s backyards and homes before, the chances of them landing on a person’s bed pillow are extremely rare. The odds of a space rock injuring a person are 1 in 1,600,000, according to Tulane University earth sciences professor Stephen A. Nelson.

Hamilton says that even though she was frightened by the event, she is thankful she didn’t get hit.

“I never got hurt,” she said. “I’ve lived through this experience, and I never even got a scratch. So all I had to do is have a shower and wash the drywall dust away.”

She says that she plans on keeping the space rock after scientists are done studying it.

“My granddaughters can say that their grandmother just almost got killed in her bed by a meteorite,” she said.