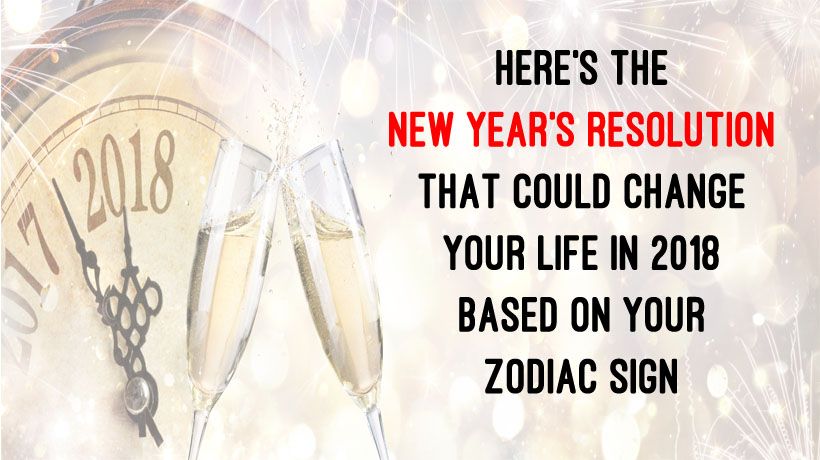 It hasn’t been the easiest year to say the least. With the world in chaos, it feels like we’ve lost sight of the things we truly desire. Read on to see if you identify with these “needs” in order to manifest them in the new year.

Aquarius (January 20th-February 18th):
Recent events in the news have been plaguing you and you’ve been in deep turmoil, Aquarius – more so than others due to your humanitarian nature. In 2018, you’ll feel a deep need to unite with the people in your community – starting locally will be your first step towards progress.

Pisces (February 19th-March 20th):
You’ve been swimming around all year, and you’re exhausted – you’ve definitely had your hands full in 2017, Pisces. Take the next year a little easier and reserve room for some much-needed R&R each month.

Aries (March 21st-April 19th):
We all know that you’ll stop at nothing to satiate your hunger for new adventures. You’re itching for a new excursion, and next year will be a great time to explore new grounds. Plan for an exhilarating trip in the coming months.

Taurus (April 20th-May 20th):
Stability is the name of your game, and you’re ready to hone in on the next chapter of your life. In 2018, you need to visibly see that you’re headed in the right direction of your goals.

Gemini (May 21st-June 20th):
You haven’t had much time to mingle with new folks as you would’ve liked to this year, and you’re in dire need of some new and stimulating conversations. In 2018, you’re eager to branch out into new social circles and build your network.

Cancer (June 21st-July 22nd):
You’ve spent all year taking care of your loved ones – your maternal instinct is ever coddling – and you’re desperately seeking for some reciprocation in 2018. You deserve to be catered to, Cancer, and it doesn’t hurt to ask for it when you’re feeling drained.

Leo (July 23rd-August 22nd):
It’s been so long since your last romantic affair that you’ve forgotten what it feels like to be in love. You’re yearning for an electric new romance next year that will awaken your spirits.

Virgo (August 23rd-September 22nd):
Your standards are sky high in all areas of your life – especially your health – and this year wasn’t a good indication of that. Your resolution for next year will be to focus on a cleaner diet that will allow you to look good and feel even better.

Libra (September 23rd-October 22nd):
You’ve spent a large portion of the year connecting with friends (old and new) and thus may have put some other responsibilities on the back-burner. At the end of the year, it’s important that you craft a plan to tackle the things you hope to accomplish and prioritize so that you can start next year with a clear head.

Scorpio (October 23rd-November 21st):
Though you may be strong, you sure can hold a grudge, Scorpio. This year, some people have broken your trust, and it’s caused your heart to close up and keep everyone at arm’s length. Next year, work to open yourself up to love again (no matter how long that may take).

Sagittarius (November 22nd-December 21st):
Generally, people love your quick-witted humor and blunt reactions, but they may have gotten you into a bit of trouble a few times this year. Your energy is often welcoming and contagious, but some people may not be used to your boldness. In 2018, practice more mindfulness – especially with your words.

Capricorn (December 22nd-January 19th):
You may have set immeasurable goals for yourself this year. As ambitious as you are, you’re human too. Life may have gotten in the way of the things you initially set out to do. Don’t feel discouraged about the things you couldn’t accomplish. Break down these goals into small, actionable steps that you can take next year; they’ll feel a lot more manageable.